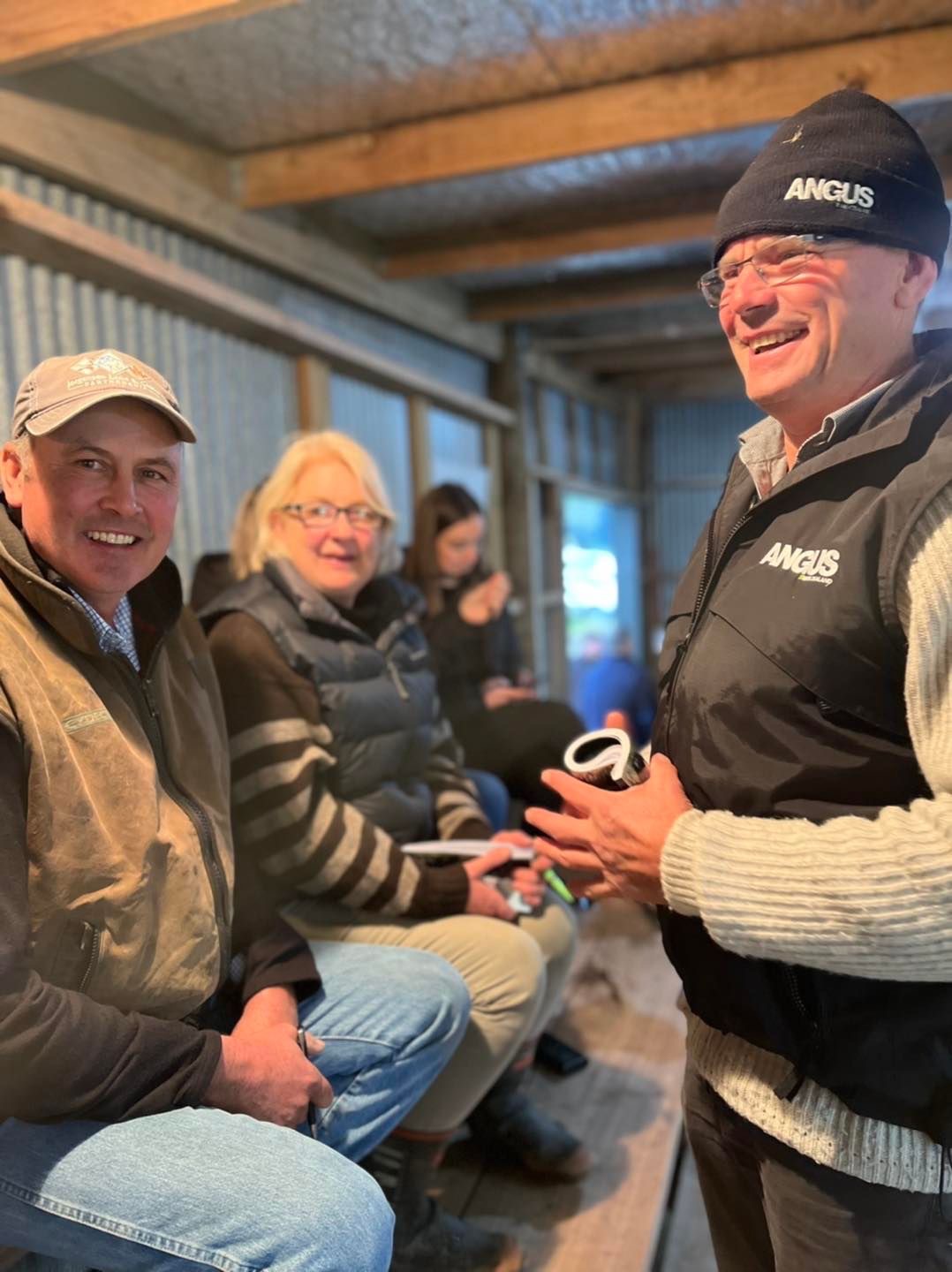 The 2022 Angus New Zealand rising two-year-old bull sale season has come to an end and it was a season full of highlights and occasions of note.

Angus New Zealand President John Cochrane says the success of the season is a true reflection of the hard work that breeders have been putting into producing the type and the genetics that the market is looking for.

“Angus New Zealand is the “Brand Champion” and farmers have recognized this and our breeders are “leading the way” to produce the product that we all enjoy in our dining experience. It’s the right product for the right place,” says John.

The hammer fell on the top selling bull for the season at Meadowslea. Lot 24 sold for $92,500 to Kay Jay Angus in the Wairarapa.

The Giddings family achieved a new South Island on-farm bull sale record with this price surpassing the record set by Mt Possession in 2021 of $88,000.

Meadowslea R705 was sold via the online auction platform called YourBid, which the Giddings family developed during the 2020 lockdown. YourBid is now used by farmers around New Zealand and as far as the United Kingdom.

Lot 24 was out of a homebred dam and sire and was described in the sale catalogue as displaying terrific growth and inheriting the important fertility traits of short days to calving and rib fats in the top 5% for the breed. He has terrific presence and outlook, with a wonderful coat, and exhibits real quality throughout the family said. This was all backed up by the young sire being structurally sound with a beautiful walk and being easy doing.

Close on the heels of Meadowslea was a $92,000 sale from the Shian Angus Stud of the Sherson family. This sire was purchased by the Orere and Kaharau studs and is the top priced bull for the North Island for the season. The outstanding price was a great way to celebrate the family’s half century breeding Angus.

Catalogued as Lot 1, the Sherson’s listed him as a very impressive young sire. They said he is a deep bodied bull packed full of meat. Great coat, bone & structurally sound and out of one of their top dams.

In the South Island it was an exceptional inaugural on-farm sale for Kincardine Angus Stud. They sold Lot 2 for $81,000 to Meadowslea Angus.

The young sire, Kincardine Rainstorme was described as a deep, thick bull with outstanding female bloodlines in his pedigree.  He also had great phenotypical attributes to back up his pedigree and EBV package and had been used in herd over heifers and cows as a yearling.

Another exceptionally strong sale price was $72,000 a price tag shared by Turihaua and Tangihau.

The Turihaua sire was purchased by Oregon Angus and was backed up by another solid price of $62,000 for Lot 3, purchased by the partnership of Kenhardt and Hallmark studs. The Turihaua sale was a complete clearance and averaged $12,731.

The $72,000 Tangihau sire was purchased by Cricklewood Angus. The complete clearance saw an average price of $14,463. Lot 3 sold for $45,000 to Brookwood Stud and Lot 14 went for $20,000 to Oregon Angus. Another notable highlight from the Tangihau sale was Lot 42 – a charity bull. This young sire sold for $11,500. All proceeds were gifted to Surfing For Farmers, a mental wellbeing programme.

This generosity is on the back of the support shown earlier in the sale season by the Sherson family who raised funds for the Starship Children’s Hospital, Oncology Ward 27, following the diagnosis and treatment of 14-year-old son Nick with Leukemia in October 2020.

The Black Ridge and Shian Angus Studs both offered bulls at their sale with all proceeds being gifted to the hospital. Between the two Sherson sires and the generosity of other rural businesses and studs the total amount raised sits at more than $32,000.

John says the support of Angus breeders and the wider industry looking out for its citizens is amazing.

“The Angus New Zealand and wider industry support for charities is remarkable.”

Contributing to the total amount for Starship is a $5,000 donation from Farmers Livestock, $2,000 from Rabobank New Zealand, $1,000 from Kincardine Angus and $250 from PBB in Feilding.

John also noted in the wider breed that generosity continued with Te Mania raising $22,000 for the Southland Charity Hospital generated by the auctioning of signed rugby jerseys and the proceeds from Lot 87 at their sale.

“These are just the gifts that we’re aware of being made this season. We also appreciate and acknowledge the contribution Angus New Zealand bull sales and breeders often make in their local communities on a regular basis and at sale time,” says John.

Three bulls around the country sold for an impressive $65,000.

Kaharau, Orere and Woodbank all sold sires for that price.

Orere sold all 12 bulls offered with their $65,000 sire heading to new pastures at the Kenhardt Stud. Their Orere average was $15,583.

The Woodbank $65,000 sire was purchased by Stern Angus. Other strong sales at Woodbank include the hammer falling on two sires at $30,000, transferring to Delmont and Te Whanga studs. Another sire sold for $21,000 to recent Angus New Zealand member McFadzean Cattle Company and Pine Park purchased a sire for $20,000. The Woodbank sale average was $12,017 for 58 bulls.

It was a complete clearance of 78 young sires for Taimate Angus with a strong average price of $11,833.

Hallmark Angus celebrated a complete clearance with 32 bulls averaging a solid $12,046 with the top price of $31,000 paid by Albert Hill Angus.

There were numerous other studs who also recorded prices of $20,000 or the high teens throughout the season.

At the Waiterenui Angus sale the contribution of Will and Viv McFarlane was acknowledged as they change pace and hosted their last sale.

John Cochrane said the breed extends it’s whole-hearted thanks to the wider McFarlane family for their contribution to the breed.

“The wider family have contributed immensely as well as serving on the board of AngusNZ over the years, and we thank them for that contribution.”

“Will has also been an advocate, mentor and helped a lot of younger breeders and that contribution should never be under-estimated.”

Waiterenui was founded 108 years ago, making it one of the oldest Angus studs in New Zealand.

The McFarlane’s said they have loved being breeders for 40 years, but acknowledged it’s not always been easy.

They have farmed through 10 droughts with most of them breaking in early winter, which has made competing in the grass-fed business of stud cattle breeding very difficult.

Friendship and support from within the Angus and farming industry is an aspect they’ve enjoyed the most over their career.

Some Waiterenui females have been retained with the prefix continuing with the next generation.

** Angus NZ has made every endeavour to ensure all sale results are accurate at the time of publishing. **