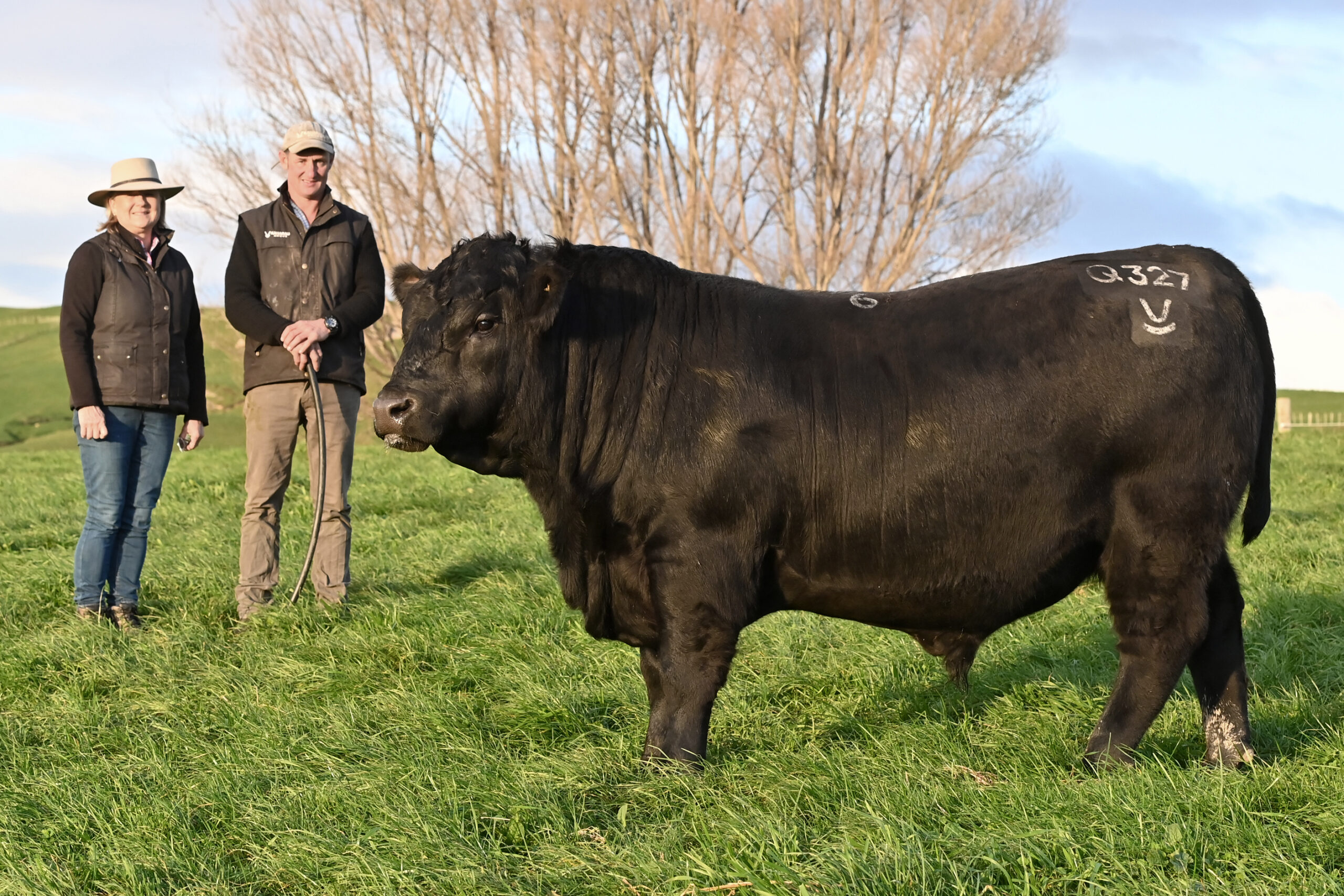 The Kaharau Angus Stud near Gisborne set the record books a-light when the hammer fell on a price tag of $106,000 for Lot 6 in their on-farm sale catalogue last week.

Kaharau Stud principal Penny Hoogerbrug said the reality of their sale results was still sinking in.

The hammer fell on $106,000 for rising two-year-old sire Karahau Q327, setting a new on-farm sale record across all beef breeds in New Zealand. The previous record price was $104,000 made at Turiroa Angus near Wairoa last year.

Penny says the bull stood out from a weaner but they never dreamt of the result that occurred.

She and the Kaharau team are over the moon with the sale result.

“We are feeling very humbled and grateful. As a breeder you always hope your sale will go well but we never dreamt of this.”

Buying Lot 6 was the partnership of the Tapiri and Elgin Angus Studs from the Wairarapa and Hawke’s Bay respectively.

“They are both young breeders and their families have been terrific supporters of Kaharau in the past, it’s great to see they are still keen on our genetics,” says Penny.

Auctioneer Neville Clark introduced him nicely and made mention he considered him to be a six figure bull.

“There had been interest in him and we have always liked him.”

On the sire side of his pedigree they are all homebred Kaharau sires, but Q327 is one of the first crop of bulls from father Kaharau Atlantic 454. There were 13 sons of Atlantic 454 in the sale – the first season his progeny has been available.

On the dam side the young bull is a combination of home bred females and the influential Matauri Reality 839.

“He is a combination of traditional Kaharau breeding with the influence from Matauri Reality on the dam’s side, which gives Q327 a good spread of data. He’s got moderate birthweight, good fat EBVS in the top 5% of the breed and terrific IMF. He also has an impressive scrotal circumference at 44cm.”

Sam Duncan from the Elgin Angus Stud in Hawke’s Bay, half the successful partnership who purchased Q327 fully agrees.

“He’s very close to the whole package,” he said.

Sam said he’s a big meaty bull but has a softness and depth and good bone with a great head and jaw backed up by good data.

“He’s a robust bull and he carries it well. Sarah and I are really rapt with him and are delighted to be working with the Thorneycrofts,” said Sam.

Sam said he attended the sale with the intention of buying a bull and it was clear Lot 6 was a standout.

“Lucy (Thorneycroft) was there and we got talking and she suggested that instead of bidding against each other we work together. So, we agreed on that and agent Tom Suttor did the bidding for us.”

“I was fairly relaxed – Tom said he was more nervous – we told him we’d tell him when it was time to stop bidding,” Sam recalls with a laugh.

Lucy Thorneycroft from Tapiri Angus said Q327 is a beautiful bull but she admits to some nerves on the buying bench during the auction.

“There was a great atmosphere and buzz at the sale, it was pretty exciting”.

Rob Thorneycroft described the sire as “a bull for the future – a meaty carcase bull with great fats and IMF”.

Lucy agreed and said “he ticked all the boxes for us. He is beautifully balanced, thick and deep, with a strong head and jaw, extremely quiet, and structurally very sound”.

The couple said he offered them the complete package.

“We are thrilled to have him and we’re really pleased we were able to partner with Sam and Sarah”, says Lucy.

Sam says Q327 suits the breeding programmes of both the studs and with slightly different calving dates he envisages the bull will get a cycle with the cows in each herd and some semen is also being collected.

Another highlight for the Kaharau team is the 11 transfers and a solid average sale price for a large offering of bulls, another aspect Penny said was an exciting aspect to the day.

The Kaharau Angus sale averaged $15,603 for 63 bulls sold, a complete clearance and while other averages have been higher in the past they have often been on smaller offerings.

Penny credit’s the success to a team effort.

“These bulls are three years in the making – from the time mating decisions are made to calving, to growing them out, to selection, to sale day.”

“For the efforts of Nick Carr (our manager) and the whole team to come to fruition and be recognised by our fellow breeders and other studs is very humbling.”

“We are really appreciative of the support from everyone – our clients, the underbidders, stock agents and all the service providers who help us get the bulls to sale day.”