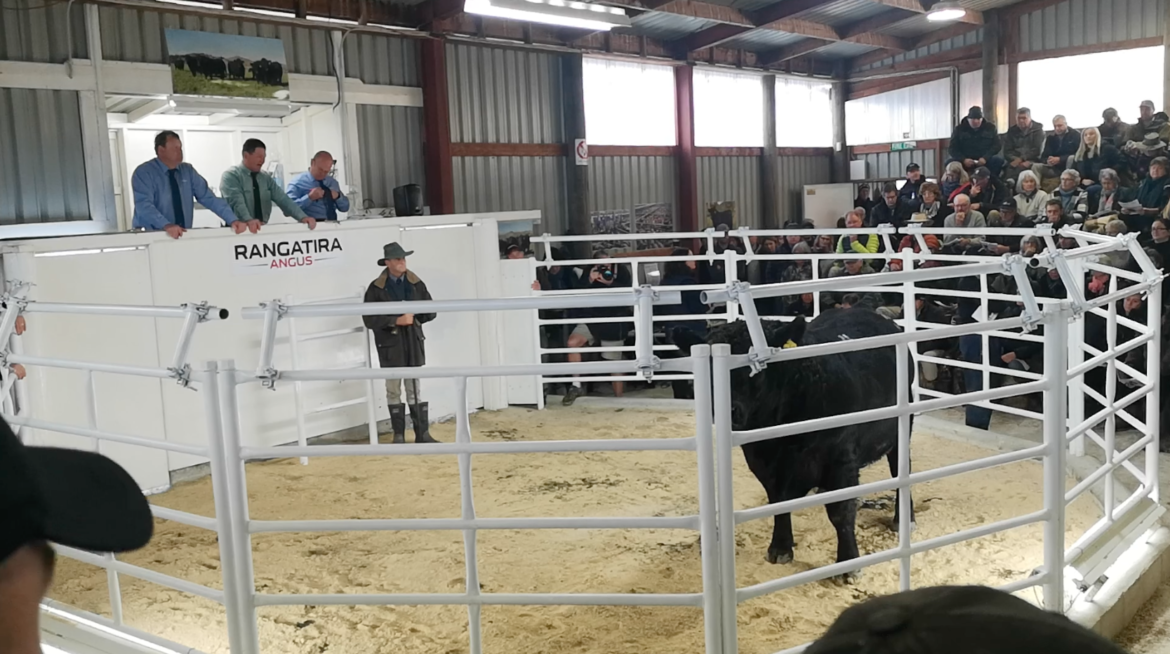 The scales were tipped in absolute favour of top-quality balanced AngusNZ genetics at the completion of the rising two-year-old bull sales for 2021.

June’s sales were nothing short of spectacular with numerous stand out highlights from across the country.

Kaharau Angus wrapped up the month by setting the record books alight with Lot 6 in their catalogue setting a new on-farm sale record price across all beef breeds when the hammer fell on $106,000.

The bull was purchased in partnership by Tapiri Angus in the Wairarapa and Elgin Angus in Hawke’s Bay and the price surpassed the previous record set last year by Turiroa Angus of $104,000.

Click here to read more about the Kaharau sale.

He extended his congratulations to all breeders on their sale results and thanked everyone for their loyalty to Angus New Zealand.

“I’d like to congratulate all the breeders who have stuck with us.”

John attended at least 15 auctions and also visited many other studs throughout the past month and noted a positive change within the membership.

“I’ve never seen the membership so happy and united; they are all working together now.”

Tapiri Angus run by Rob and Lucy Thorneycroft not only made their mark with the purchase at Kaharau but they have also celebrated their own milestone, marking 60 years of breeding Angus cattle in the Wairarapa.

North in the Manawatu, the Dalziell family of Atahua Angus also celebrated their 60th anniversary.

Tarangower Angus, located at Mahoenui in the King Country celebrated 75 years of on-farm bull sales and 95 years since the stud was established and in the South Island at Clarence the Woodbank Stud of the Murray family marked 85 years of breeding hill country Angus genetics.

Also in the South Island, and realizing a spectacular sale result at their first ever on-farm auction, was Mt Possession Angus.

The stud, that was started five years ago, is a partnership between Ryan and Sarah Hussey and Donald and Leigh Whyte. The Mt Possession team hit the on-farm auction scene with a top price of $88,0000 recorded for Lot 3, setting a new record price for South Island on-farm sales. It was also the second highest price paid for an Angus bull this season.

The sale was a much-needed tonic following the storm that ravaged Canterbury at the end of May causing bridge, house, road, track and fencing damage to the property. A total of 19 bulls made an average of $11,200.

The young breeder enjoyed noteworthy success with a top price of $48,000, backed up by a complete clearance and average price of $9772.

Other notable sale highlights were Stern Angus recording a top price of $64,000 with that sire taken home to the Tangihau Stud. The average price was $11,625.

Tangihau Angus recorded a top price of $45,000 with the bull transferring to the Shian Stud. The 32 Tangihau bulls sold recorded an average of $14,225.

Turiroa Angus realized five figure price tags – $60,000 with the buyer Merchiston Stud and $52,000  with that bull taken home by Cricklewood Stud. The average price was $13,830.

“Everyone has a beginning in the stud game and has to start somewhere. Angus New Zealand welcomes anyone who wishes to breed Angus genetics.”

It was an end of an era at the Rangatira Stud of Charlie and Susie Dowding near Gisborne, when they hosted their final on-farm bull sale.

The balance and power of the Rangatira breeding programme was evident with a packed buying bench.

The Dowdings have been breeding Angus cattle for 60 years.

John attended the sale and said the Rangatira prefix will be a feature in many pedigrees for generations to come.

“That’s the significance of the contribution Charlie and Susie have made to the breed and we thank them for being 100% loyal to Angus NZ.”

The value fellow breeders place on the Dowding’s breeding programme was also obvious in the strength of the sale results recorded.

The top price was $75,000 for a bull bought by Quailburn Downs in Central Otago and Rolling Rock in Te Akau, followed by $35,000 bought by Meadowslea and $32,000 bought by Turiroa. The Dowdings also offered yearling bulls with the top two priced yearlings selling to Kaharau Angus for $8200 and $5800.

Until last year the couple held the record price for a bull sold on farm.

“They sold Rangatira Icebreaker for $100,000 in 2015 at their on-farm auction and it was only a couple of years ago that record was broken,” said John.

When thanking Charlie and Susie for their contribution to the breed at the on-farm sale John looked around and said the packed buying bench was testament to the breeding programme the couple have put together over the past 60 years.

“Crowds like this don’t happen by accident – they are here because they appreciate what Rangatira have done with their breeding programme.”

“Angus New Zealand congratulates and thanks Charlie and Susie for their contribution.”

**Angus NZ have made every endeavour to ensure that all breeders who have celebrated a milestone this year have been included in this sale season review. However, if we have inadvertently missed you, please let us know and we’ll be happy to put this right. **