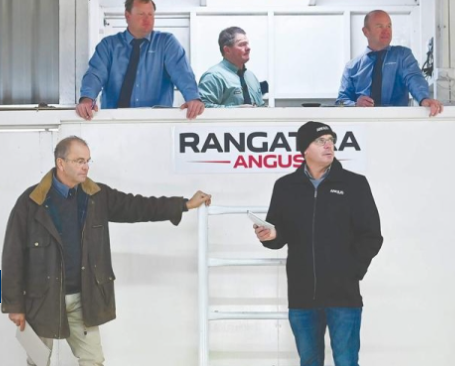 Charlie and Susie Dowding sold their last crop of rising two-year-old bulls for an excellent average of $11,588 and a sale-high price of $75,000.

The sale, tinged with sadness, was the final part of the dispersal of the Rangatira stud stock and was fittingly held in front of a packed rostrum.

The $75,000 bull (Lot 4) — described by auctioneer Neville Clark as “every bit a bull” — went to Quailburn Downs in Central Otago.

Angus New Zealand president John Cochrane made the trip from South Otago to acknowledge the loyal support of the Dowdings.

“It’s a real privilege to be here on behalf of the association,” he told the crowd.

“We wanted to pay a special tribute to Charlie and Susie for what this stud has contributed to the industry over 60 years.

“Big crowds like we see here today for this sale don’t happen by accident. They happen because of the quality stock that the stud produces,” Mr Cochrane said.

In his opening remarks, Mr Dowding said it was an “absolute thrill to have a rostrum full of such wonderful people”.

“It’s also very special to have our family here with us for our final muster.”

He paid tribute to a wide range of people who had supported the stud over the years and to the special Rangatira team, including Alastair MacPherson and Dollar Maxwell.

He also made special mention of the late John Bayly from Cricklewood Angus and Tangihau.

“John was an amazing person who did a huge amount for farming and for the Angus breed.”

On the sale result, Mr Dowding said he and his wife were thrilled with the outcome and the average price achieved, which was up on last year.

“Our final sale is tinged with sadness for us, of course, but we’ve had so many fantastic years and we’ve got no regrets.”

Long-time auctioneer Bruce Orr said it was a sad but great way to finish.

“The stud certainly ended on a high.

“People appreciated the quality of the stock on offer and they were no different from what they have ever been.”

Mr Clark said it was “a wonderful way to finish 60 years of history, with a very good clearance and a solid average”.

“The cattle presented were a credit to the stud.

“I’m a bit emotional about it actually,” Mr Clark said.

“As people, Charlie and Susie are as good as you could ever meet — really decent New Zealanders . . . and the cattle are a representation of the quality of the people who have farmed them.”Sale details –