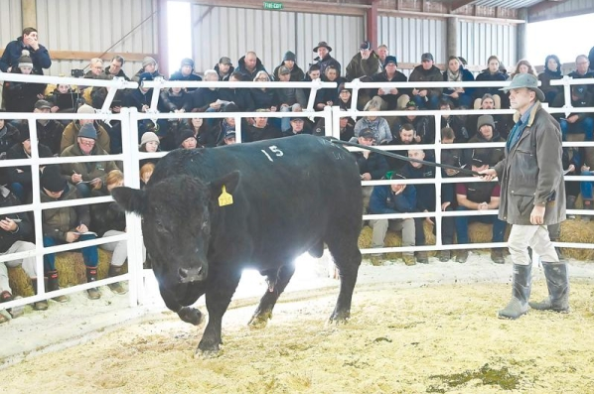 The sale of rising two-year-old bulls of all breeds generated more than $5.512 million for the regional economy this year, which was up on the result in 2020.

Season success was topped off with a New Zealand-high average this week and a New Zealand on-farm record high price for Angus.

The black cattle contributed $4.2 million of the total sum across the dozen Angus studs from Wairoa to Tauwhareparae.

In all, across the various breeds, more than 500 young bulls changed hands in this region this sales season. Around 360 of them were Angus.

It was all finalised on Thursday with the last of the sales at Wilencote Herefords at Ngatapa. East Coast Angus Bull Week finished with the Turiroa sale near Wairoa on Wednesday evening.

“Great for the people involved and the Gisborne-Wairoa district.”

Mr Orr paid tribute to the work this week of principal auctioneer Neville Clark from Carrfields.

“It was a great performance by Neville — 11 sales was outstanding — with his usual humour and business efficiency.

“He was an integral part of the success of Bull Week.”

Mr Clark himself said the week was “outstanding”.

“But you would have to say the sales season here has exceeded expectations.

“Genuine cattlemen know what they are looking for,” Neville said.

“They have the vision to see the end result and quality is always going to pay off.”

PGG Wrightsons genetics representative Emma Pollitt was alongside the sales rings throughout the week.

“It really has been a sensational week,” she said.

“It showed a lot of confidence in what the East Coast cattle breeders are doing with their breeding programmes.”

Emma said the region produced the highest average in the country ($15,603 at Kaharau Angus on Monday night), and also the highest price.

The $106,000 sale at Kaharau that night was a New Zealand all-breed on-farm auction record.

“It was good to see the highs but also good to see how well the sale of commercial bulls went.”

She summed up Bull Week, and the season for that matter, this way.