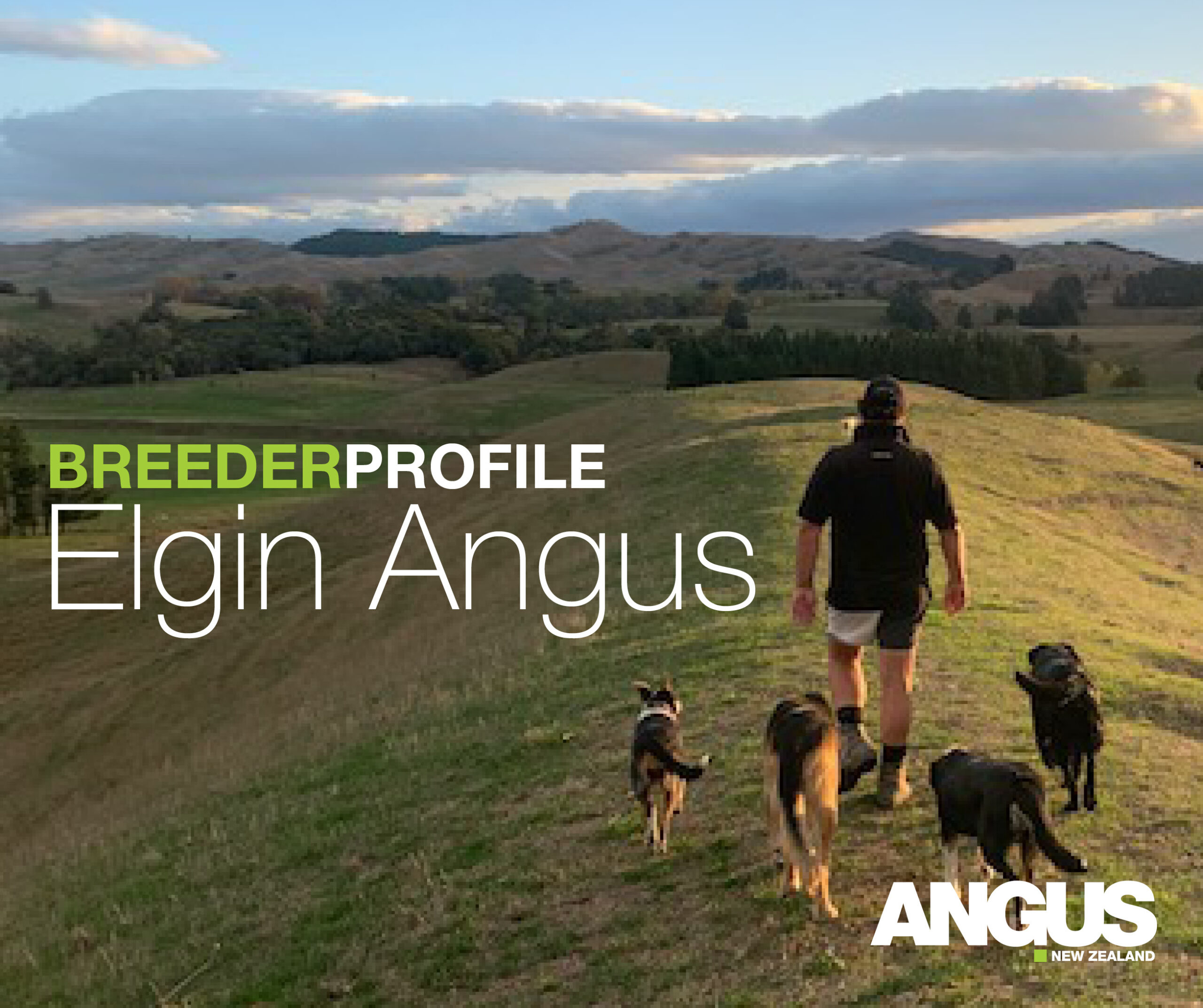 The gumboots are out for an overdue wet winter at Elgin Angus in Central Hawke’s Bay and Sam Duncan is gearing up for a busy lambing and calving season.

Sam and Sarah Duncan are the sixth generation on the 340ha farm in Elsthorpe, carrying on the Angus stud founded by Sam’s grandfather Jock in 1952, and the work of his parents, Mick and Barb.

It’s a settled operation, running the long-established Angus stud, calving 135 cows and heifers and lambing 700 ewes on the easy rolling country. Sam also trades anywhere between 400-800 lambs per year along with growing 15-20ha of peas for McCains on the fertile flats. The Duncans’ property contends with the unpredictability of the Hawke’s Bay climate. Annual rainfall is around 1200ml but there are large fluctuations between high and no rainfall with good growing seasons in between.

Sam spent a few years away from the property, fencing for a Hawke’s Bay contractor, but returned to help out his dad for 12 weeks or so when he was recovering from a back operation. Casual work around the district followed and his progression into full farm ownership “slowly morphed from there” over the ensuing 16 years or so. It’s now five years since Sam and Sarah, a teacher, took on Elgin Angus in their own right.

The breeding priorities at Elgin Angus are clear: “Good functional cattle. Easy doing, plenty of meat, good temperament with a nice head and jaw to boot. And bulls that look like bulls,” Sam says.

In 2021 Elgin Angus bought a half share of the top-selling two-year-old Angus bull in the country, Karahau Q327. The hammer fell at $106,000 for the rising two-year-old sire, setting a new on-farm sale record across all beef breeds in New Zealand.

Q327 is the partnership of Elgin Angus and the Thorneycrofts at Tapiri Angus in the Wairarapa. Sam describes Q327, who they call Olympic, as a big meaty bull with “plenty of depth and softness, who  carries himself well.” He has a good spread of data to support his addition into the Elgin Angus breeding programme.

Sam says he’s never mounted a bid of that size before but he went to the Kaharau sale with a plan to buy and he expected strong competition for that top bull. “He’s an unbelievable bull. We’ve had him here for a year now. He’s got an amazing temperament, quiet as quiet and I have no doubt from seeing how he’s growing out that he will fit right in to what we are trying to achieve with breeding moderate-framed bulls with plenty of meat.”

Another exciting purchase for the stud was Taimate R186. Sam bought R186 this year and is looking forward to seeing how he performs. The motivation for the purchase of the South Island bred bull was the impressive data set that accompanied the thick set, big-boned bull. As Paul Hickman of Taimate Angus said, “he has it all – pedigree and performance.”

Sam says he’s trying to build on the traditional Angus strengths – “great natural doers and great at converting green grass into red meat” – and also looks for also a balance between phenotyope and genotype which meets his clients needs.

The cows at Elgin are run commercially and Sam grazes them hard to clean up pasture in the summer to produce quality feed for trade stock. Running the cows in this way means lower performing cattle are easily identified and can be culled which all works to keep consistency within the herd.

Covid has presented some challenges and the biggest one for Sam right now is trying to get rid of stock as meat processing plants are running low volumes and low throughput due to staffing issues.

He also admits he’s having an unusually hard time sourcing experienced casual staff. The property typically needs at last one casual for busy spells for up to three days a week but for whatever reason they’re hard to come by just now, meaning Sam has had to re-think how he works with the resources he has. Work has started on long overdue new sheep yards and a woolshed, built to a layout for ease of use for a single worker if necessary. Already, redesigned fencing and the addition of laneways has helped Sam work more efficiently.

Longer term, Sam would like to buy or lease more property in the area to grow the scope of the sheep and beef operation, though land is getting harder to come by with competition from the likes of forestry. Previously, property that was easy rolling country, 80% of which could have been cultivated by tractor is now going into trees, so “it’s a bit of a challenge if you’re looking for more land,” he says.

But for now, lambing and calving are the number one priority with work focussing on ensuring live lambs and live calves. And of course he’s hoping the current wet winter will give way to a good growthy spring, setting up for a good summer.