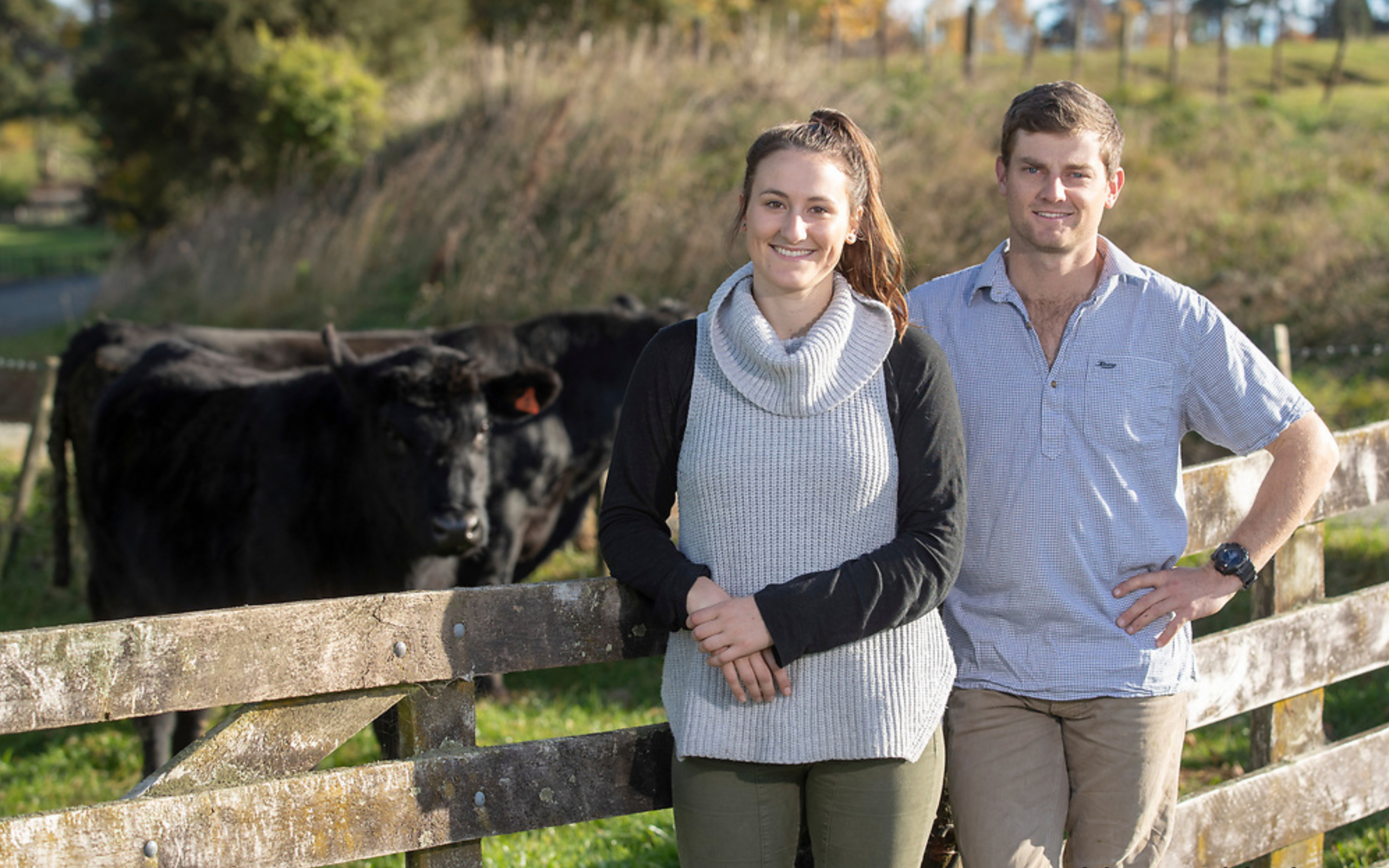 Herd replacement selection is being enhanced by the use of Allflex Tissue Sampling Units (TSU) in a commercial beef herd in Hawke’s Bay.

The cattle are mainly Angus genetics, although the 75 head cow herd has evolved from a cross-bred herd since he established Crawshaw Farming in 2018, meaning there is some genetic variation.

The majority of the business is finishing sheep and beef, with the Allflex TSU system being used in the cow herd to help identify top performing herd replacements.

The cattle for finishing are brought in at 18 months old – antibiotic free and not fed any imported feeds with a declaration made by the vendor at the time of purchase. He’s targeting a 320kgCW steer and 290kgCW heifer in a six-month turnaround.

The lambs for Atkins Ranch are brought in weighing 30kgLW in the autumn with the aim of finishing them in 150 days at 21kgCW. The lambs are sourced from GAP accredited properties and must be antibiotic free and fed no imported supplements and have lifetime traceability. He also buys in about 300 in-lamb ewes.

The main purpose of the cow herd is to groom pastures ahead of the young stock.

“They are here to work. The cows go from not eating much during winter to opening up for a big intake in spring and following the pasture growth.”

All female progeny calve as two-year-olds. A lot of data is recorded by the Crawshaw’s prior to mating, with all yearling heifers joining the bull. The heifers typically scan 90% in calf and any empty heifers are culled.

The DNA samples are sent to PBB and Neogen for genomic testing, in particular the Igenity suite of genomics. It’s that genomic data Patrick uses to decide on the heifers to join the bull the following season and become his final herd replacements. All male progeny is castrated and finished for the IMF programme at Progressive Meats.

“I tag everything at birth and record for temperament and maternal ability. I’m measuring a lot of traits but I don’t know what I can’t measure,” he says.

The Igenity testing undertaken on the DNA sample taken helps build that picture and allows him to make comparisons.

“Because I have a smaller herd, I want accuracy in what I’m retaining – I don’t have the luxury of large contemporary groups to see how they perform. But the Igenity genomic testing puts my heifers into a bigger population (on paper) and means I can check them against their peers in other herds from a genetic perspective.”

Patrick says the Igenity tests gives him confidence and a measure for traits such as longevity and carcase traits – characteristics that can’t be read phenotypically.

“The Igenity data helps me reduce numbers down – it paints a bigger and wider picture of what those animals are worth to me. For example, with IMF in cattle it gives me an indication of value of the off spring of that female and how her progeny will help me reach the market parameters.”

Patrick says the Allflex TSU system makes it easy to collect a clean and uncompromised DNA sample for testing.

“The applicator is familiar to farmers from a tagging point of view. We put a tag in the hole left by the TSU applicator. It’s simple to use with the applicator putting a small tissue sample directly into a vile behind the ear which is then sealed, so I’m confident in the integrity of the sample collected. Hair samples can sometimes be incomplete or prone to contamination and the TSU applicator removes human error – it’s all barcoded to the animal – it’s clear cut and professional.”

Because his herd has a diverse genetic base Patrick approached PBB and Neogen before starting Igenity testing.

Patrick says while the cows are a smaller part of his business, they play a vital role in the success of the finishing component.

He says using the Allflex TSU technology for genomic testing is lifting the accuracy of the retained females and their performance – “It completes the picture for me.”