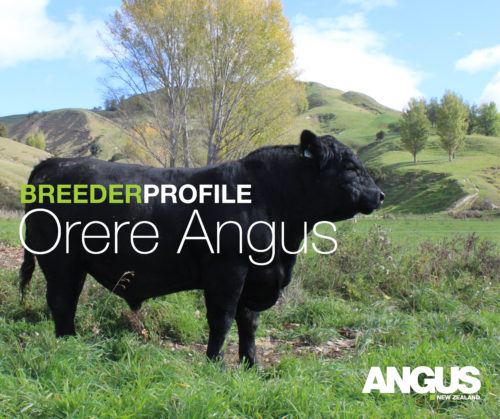 The year 2017 is one Ben and Kylie Johnson have etched in their memories. It’s the year two major milestones in their farming career occurred.

It was the year they purchased their first registered Angus cows and established their Orere Angus herd as well as buying the family farm from Ben’s parents, Lee and Maria.

“It was a very big year,” the couple agree.

And they’ve kept the pace up ever since.

The Johnsons, along with children Lachlan 15, Natalie 13, and Sophie 10, had been breeding commercial Angus for years and the opportunity to take the leap to stud breeding arose with the dispersal of the Alpine Angus herd in 2017. They bought 20 cows initially and will calve 65 registered cows this year.

Running alongside the Orere stud cows are 170 commercial Angus cows and 3000 cross bred ewes. The business is run as a breeding and finishing unit.

The Johnson’s farm 730ha (630ha effective) 45 minutes south-west of Gisborne in the Pehiri district. The 100ha difference comprises of native bush and regenerating scrub with 25ha in a QE2 covenant. The property has 20-30ha flats with the rest medium to steep hill country rising from 250mASL to 450mASL and is a good balance of north and south facing hill country. Annual rainfall averages between 1000-1200mm.

“That is, they are moderate in size but heavy in meat and bone, have a strong head and jaw, are structurally sound and well put together with a focus on fertility and maternal traits,” says Ben.

“When we were solely running the commercial herd that was what we were looking for. We knew what we liked and wanted and we’re working to replicate that in the stud.”

A keen eye for detail is key when it comes to genetic selection at Orere.

Ben says the stud heifer replacements are selected on temperament, structural soundness, type and they have to get in calf as a yearling.

When it comes to selecting stud sires the couple agree that genotypically they are targeting an EBV package that’s middle of the road.

“They need to be breed average for birth weight and calving ease as well as breed average in growth EBVs with good milk and be structurally sound with a good temperament.”

“80% is phenotypically based – they need to look right and be sound and correct with the rest following on paper.”

The Johnsons agree temperament is important throughout their herd.

“It’s key to stock handling and temperament flows down through genetics.”

The breeding objectives are clear for the Johnsons. They know what they like and aren’t afraid to go after it.

In 2020 they inspected a bull during the East Coast bull walk – Turiroa Ragnar P224.

“He was exactly what we were looking for. He’s nice and strong, full of meat and had the EBVs to back him up – he was just the bull we wanted.”

Ben recalled they expressed some interest to PGG Wrightson stud stock agent Emma Pollitt who in turn said there was other interest in the sire.

“She told us it might be tough for us to buy him on our own,” recalls Ben.

“So, two hours before the sale started, she introduced us to the Kaharau Angus team. We looked at the bull together and came up with a plan.”

After some spirited bidding, the hammer fell on a price tag of $104,000 – the partnership of Orere Angus and Kaharau Angus were the successful bidders.

“We knew that bull was a big opportunity for us to make our mark. It was scary but it was also an opportunity too good to pass up, we had to have a go,” says Ben.

He says they know exactly what they want to produce from their cattle and they knew that bull was going get them there.

“There were a lot of nerves sitting at that sale and it took a while to sink in afterwards,” he says.

Calves from Turiroa Ragnar P224 are expected this August.

“I’ll be quick out of bed this season,” says Ben laughing.

Other stud bulls that are making a mark are Turihaua Hulk and Waiterenui Theo – sires from which progeny will be available in the Johnson’s sale bulls this year.

“Both those bulls are showing attributes we’re aiming for.”

The Johnsons will be offering 12 rising-two-year-old bulls at the Gisborne Combined sale on Monday June 28th.

The stud bulls that don’t make the cut for the sale, are carried through to 18 months old and sold to the works.

When it comes to the commercial herd the Johnson’s employ the same genetic selection criteria as for the stud herd and while past sires have been bought from other East Coast Angus breeders, as the number of home-bred sires increases, some have been used over the commercial cows.

All bull calves in the commercial herd are steered with the top line offered at the Matawhero weaner fair. The rest are carried through to 18 months old and sold in the store market. The top line of commercial heifers, after replacements have been selected, are sold at 18 months to two years old for breeding with the rest of the heifers finished.

“We used to finish all our steers but with the stud bulls coming through we’ve entered the weaner steer market,” says Ben.

Calving starts late July early August with the stud cows fed hay daily behind a wire to allow for weighing and tagging at birth. A few days later those cows and calves are shed off to conserved pastures.

On October 10th the cows and calves are drafted off into their mobs for mating. The bull runs with the cows for 55 days. Averaging 95% conception rate in the mixed-age cows and the R2 heifers 100% conception since 2017.

Over the summer months the young bulls are weighed monthly to monitor growth and in March the final selection of sale bulls is made and are freeze branded. In early April the sale bulls are semen tested and late April they are structurally assessed by an independent assessor.

“That’s part of the East Coast Angus Association – as a group of breeders we want to set a standard,” says Ben.

Weaning also occurs in early March with target weights of 300kgLW on average. The weaners are then fed daily with balgeage for the first couple of months and their temperament is monitored.

400-day weights are recorded at the end of September and the first selection of replacement heifers is made and the first cull of the yearling bulls occurs.

Muscle scanning happens mid November and is done by Hugh Boulton who works alongside Bill and Judy Austin, Austins Ultrasound.

All performance recording is currently done manually but Ben and Kylie say as the herd grows they’ll make the move to a software programme.

“We’re small enough to do it manually at the moment.”

DNA testing and parent verification of all replacement heifers is done via PBB and PBB also input all the EBV and registry data into ABRI for the Trans-Tasman Angus Cattle Evaluation (TACE). The Johnson’s also use Pivot Design, PBBs graphics team, for their bull sale catalogue.

Ben and Kylie say a lot of their marketing is concentrated on targeting local commercial beef farmers via local newspapers and they also use Facebook as well as sponsoring their local school.

Looking ahead the couple say they’d like to increase the number of stud bulls they sell to 25 and hope that’s possible in the next five years.

“We want to offer 25 top class bulls at an on-farm auction and we’re targeting growing our registered cow numbers to about 100 to achieve that.”

But the couple say they are mindful of growing too quickly and maintaining quality is key.

Ben and Kylie said they are thankful for all the support they’ve received from East Coast Angus breeders and Angus New Zealand since they started their stud.

“We’re thankful for all the support we’ve been given since we started the herd – everyone has been really friendly and supportive.”

Also, part of the Johnson’s breeding and finishing operation is 3000 Coopdale ewes.

Ben says 1000 ewes are joined with a terminal ram to meet the early November market with the rest of the ewes joined with a maternal ram with that progeny finished between December and May.

“The goal is to finish all of them at an average of 18kgCW.”

Farming on the East Coast means it can be a hot humid environment and fly strike can become a problem but Ben and Kylie’s philosophy is that prevention is better than cure. The Johnson’s electrodip the ewes up to three times in the season depending on conditions.

“In a bad year we can also get facial eczema – so it’s something we keep in mind but with the good balance of North and South facing country we can run the ewes on the safer south facing country through Autumn to reduce the risk,” says Ben.

Ben says when his parents, Lee and Maria bought the property 29 years ago, investment and development was needed.

“They have pretty much re-fenced the whole farm – there’s been a lot fences, internal subdivision, tracks put in and water reticulation developed.”

He also noted the Waikura Stream runs down one side of the property with the majority nearly all fenced off over the past 15 years with more 5km to date fenced and less than 500m remaining.

“That was done well before any regulations came in,” says Ben. The family have also done riparian planting of the stream.

Pasture development has recently been undertaken on the country that allows.

“Since Kylie and I came home in 2009 we’ve improved 40ha of cultivatable land into new grass through a cropping programme.”

“We started that development in 2010 and the last paddock was done in 2019 now we’re grass to grass and all our lambs are grass finished.”

Ben’s father Lee, is employed as a permanent staff member alongside the couple and they also employ a casual fencer three to four months a year.

Community is an important part of rural life for Ben and Kylie and both are heavily involved in their local community and believe in giving back.

Kylie has been on the Board of Trustees of their local primary school, Waerenga-O-Kuri School for six years with three of those as chair.

Off farm Ben and Kylie are keen golfers and are involved with the Tahunga Golf Club making the most of the competitive and social opportunities it offers. Both have served as club captain and Ben has been club president.