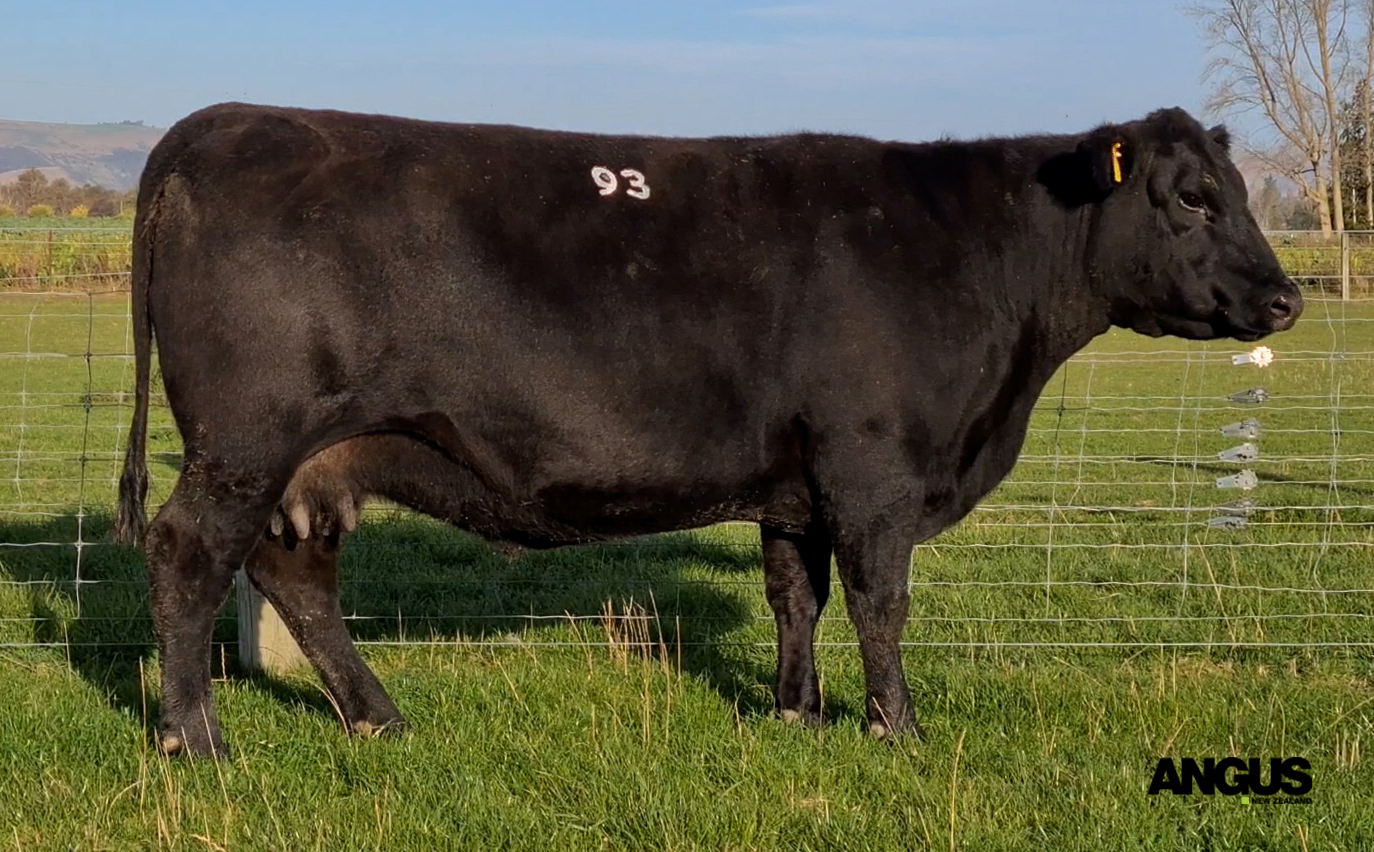 A 10-year-old in-calf Angus cow set has what is believed to be a New Zealand record, selling for $16,050 at auction.

The Giddings family of Meadowslea Angus in Fairlie, recorded a complete clearance of 108 females in their fifth annual in-calf production sale last week, with 85 of those animals being sold for stud to Angus New Zealand members.

The Giddings offer a range of females from rising two-year-heifers to 10-year-old cows. The overall average sale price was $2250 while the twenty, 10-year-old cows averaged $3800.

“It can be pretty hard to part with the older cows so it’s nice to see their value acknowledged by the market,” said David Giddings, Meadowslea Stud principal.

Ballanee purchased three females from the sale. David said the cows will remain on New Zealand soil but would be flushed for embryos which will be sent to Australia for use in the stud.

“Depending how it goes there could be embryos made available in New Zealand.”

He said Lot 93 had very good carcass data, and had recorded the biggest eye muscle area as a two-year-old heifer, as well as the second best intra-muscular fat percentage (marbling) in the whole herd.

“G1000 has tremendous easy-doing ability, showing up with her rib and rump fats in the top 5% for the breed and has a great top-line and outlook. Her son M564 was retained as a herd sire and still holds the Meadowslea record for eye-muscle area.”

Of the older cows David said they are in essence capital stock and it has been their policy to offer their 10-year-old cows in this annual sale, the only such sale in the NZ Angus industry.

“They are valuable as they have proven themselves throughout the challenges of seasons and have produced calves each year. These particular 20 cows have produced bulls that have sold for a combined $250,000 with more progeny yet to sell.”

“They are valuable cows and it’s good to see them recognized and these were a particularly special line. Their buyers will get another five years or more out of them.”

The Meadowslea herd is known for its high fertility which is one of the reasons David says they host the female production sale.

“Our conception rates are high so we have genuine surplus stock to sell. We scanned 188 heifers to the bull this year and there were only four dries, so it gives us the chance to offer such a great selection to buyers.”

Another highlight from the sale for David is that at least three purchasers plan to register their females and start new Angus herds.

One of those buyers was well-known Wairarapa farmer John McFadzean.

McFadzean purchased a total of 21 in calf females from the sale and had signalled his intent to become a registered Angus New Zealand breeder.

Angus New Zealand general manager Jane Allan said it was great to see continued commitment from new breeders and the Association was looking forward to welcoming and supporting the new members.

David mentioned their previous female sales had also resulted in a number of new studs being established.

The Meadowslea female sale is run in a helmsman format simultaneously online and on-farm.

The family use Yourbid as their online auction platform – a system they developed themselves in three evenings during lockdown in the lead up to their 2020 female sale.

At last week’s sale they had a total of 870 different bids with an approximate 50:50 split between on-farm and online bids.”

“We had people log in and bid from a tractor in Southland, a car parked on the side of the road and two were bidding from Australia,” says David.

Yourbid has been used to host sales in Scotland and throughout New Zealand with a sale booked for Romania in the near future.

“It was designed to make bidding as easy as possible for buyers. Bids can be placed into the online system remotely, and on-farm buyers can either use their smartphone or hand paper bids to the office where they are immediately entered into the same system. With a minute to go you can still place a bid on any lot. It means everyone gets an equal chance at their preferred animals.”

The Yourbid platform was recognized with a Lincoln University B.Linc and Farmers Weekly Innovation Award last year and has recently diversified into selling property as well.