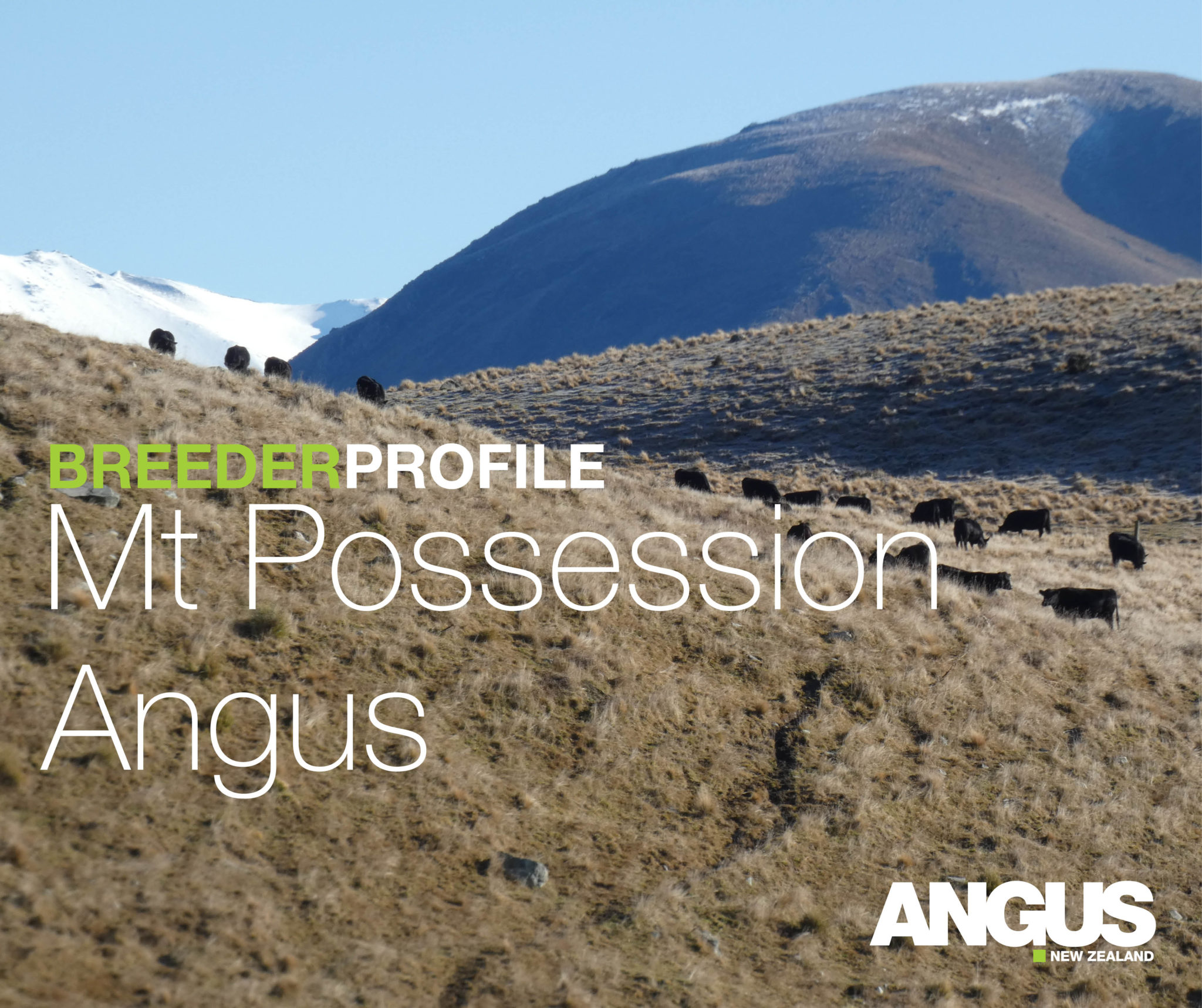 It’s been naught to more than 100 registered females in five years for the Mt Possession Angus Stud thanks to a successful AI and ET programme.

The Mt Possession Stud is founded on 26 cows and eight heifers purchased from the dispersal sale of Bruce Alexander’s Goldwyn Stud in 2015.

Stud principal Ryan Hussey says a few other females have been bought but an ET programme has helped them make gains from cows that had a lot to offer.

“We bought useful females from Bruce so it’s about expanding the influence of those top Goldwyn females.”

“We’ve put emphasis on the female foundation to meet our aim of breeding bulls that have the structure and constitution to last in the high-country environment.”

“Not only do they have to last in the high country they have to last while producing progeny from the 900 head commercial cow herd that provides daughters with the do-ability and fertility to perform and steers that will go on to finish at the top end of the market,” says Ryan.

The registered herd was started after it was difficult to find bulls to suit their needs for use in the commercial cow herd. This herd is predominately Angus with about 200 Angus Hereford cross cows.

The Mt Possession Angus Stud is part of the Whyte Farming Company comprising 17,000ha, one of the largest remaining family-owned properties in New Zealand. Ryan manages the sheep and beef operation (15,000ha) and Donald and Leigh Whyte (the owners) run the deer platform on 2000ha. There’s a total of 12 staff across the business. The Mt Possession Angus Stud is a joint venture between Ryan and his wife Sarah and the Whytes who are 50:50 partners.

The sheep and beef block where Ryan and Sarah live and work is referred to as Hakatere and is 25km inland from Mt Somers while Mt Possession itself looks over the deer component of the business.

The Hakatere paddocks (where the stud cattle are grown out) are 700masl and the property rises to the top of 1450masl. The main part of the property gets 500mm of rainfall while the western end can get about 850mm.

“We get dry summers and long cold winters and that’s one of the reasons we got into bull breeding. We needed bulls that could the job for us here.”

There’s several snow falls every winter and once in a while it can be up to a meter deep.

Ryan says because of the climate and topography they are aiming to breed cattle with good growth and carcase traits without extremes.

“Structure and constitution are paramount as well as longevity and fertility. They need to be animals that can run on bugger all,” says Ryan.

“The cattle must have a good spring of rib and capacity – they eat a lot of cocksfoot and they need to be able to turn that into milk or beef.”

“We’re after a nice balanced animal without extremes. They need to have thickness and grunt too.”

He says breeding and developing the bulls up at Hakatere is a difference they can offer bull buying clients compared to other stud properties.

“The bulls are grown out on cocksfoot – all progeny is finished in the commercial operation so the stud has a genuine commercial focus.”

Ryan’s livestock selection decisions aren’t based on EBVs alone but he acknowledges they are an important tool in any genetic decision.

“I like a balance across the EBVs but first and foremost we have to have the type of animal we want.”

He says frame score is also part of his decision-making process.

“We look for moderately framed animals because the cows don’t get any supplementary feeding.”

Ryan says the heifers are calved on the flats and might be offered hay or straw. The stud cows also calve closer to home, for ease of tagging and weighing at birth. The commercial cows calve on the hills.

The performance data for all stud cattle is uploaded for the PBB registry team. DNA testing and sire verifying is also carried out in the stud herd. A move to StockBook, a software program that allows stud breeders to collect, view and manage performance data in real time is pending now the herd has grown. Resolution, a cloud-based software is used for their on-farm record keeping.

Most of the registered females are artificially inseminated and managed as a single mob with the ET programme being run from the foundation Goldwyn females.

AI has been used in the commercial heifers since 2010 as a means to improve genetics.

“Back then we bought a couple of bulls that we liked the look of and ran them across some females and we got good female progeny from them.”

Incorporating AI in the stud means they can access bulls that they couldn’t necessarily afford to buy outright.

The AI programme and natural mating starts in December and weaning occurs in March.

Ryan says they don’t conserve pasture to calve on as the frosts generally ruin it. From autumn on, the cows and ewes clean up the hills.

The stud cows and heifers begin calving mid-September with the commercial herd starting a week later.

“By the time the calves hit the ground we are hopefully growing grass. We could calve a bit later but we also dry out early, so it’s a balancing act,” says Ryan.

Ryan says weaning weights and the timing of when it occurs is very much season dependent. This past weaning the bull calves weighed an average of 270kgLW.

All bull calves from the commercial herd are castrated and finished, being supplied into Anzco’s Natural Beef programme at an average of 330kgCW at around 18 months old. The first steers are drafted off in March with the rest following through until late winter-early spring.

When it comes to bull selection for use in herd and to offer for sale, constitution is number one priority.

When buying herd sires, Ryan prefers to personally inspect any bulls purchased if he can and has travelled to the United States in the past. Other bloodlines have been sourced from Australia as well as New Zealand.

He says there’s two sires that have had an influence on the flourishing stud herd. They are Kaiwara 480 (affectionately known as George) and a home bred sire Mt Possession M13.

He singles out these two sires for both producing consistently good progeny.

“There’s not a lot to draft off the bottom of the progeny from these bulls and the data is sound across the board too.”

Sons of both sires are being auctioned off at the inaugural Mt Possession on-farm bull sale on Monday, June 14th.

Ryan says their first bull sale is an offering of 23 rising two-year-old bulls.

“The auction will be held in the woolshed with a big screen showing videos and photos of the bulls, which will be penned up outside.”

He said the Mt Possession team is quite excited.

“We’ve had positive feedback and we hope people will turn up and put their hand up on the day – we’ll find out in a couple of weeks.”

Marketing of the bulls, until recently, has largely been word of mouth with the bulls sold via private treaty.

However, Ryan says they’re making efforts to up the ante now they’re hosting an on-farm sale.

“Local stock agents have done a good job for us with the private sales and now the bull numbers are increasing things are starting to grow by themselves.”

A Mt Possession Angus Facebook page has been started but Ryan admits marketing the bulls is an area that needs more attention as it’s not something that comes naturally.

He says preparing for the sale has been a learning curve while juggling those demands with the needs of the rest of the business.

“The stud is just part of the wider enterprise. We’ve also got 11,0000 half-bred ewes and 900 commercial cows that keep us busy as well.”

Most of the lambs are sold at an on-farm lamb sale. Ryan says this year the sale saw 8500 lambs and the annual draft of ewes sold in about 30 minutes. The annual draft ewes often go on and breed for another few years on the Canterbury plains.

“Then we get on with loading trucks – it’s busy,” says Ryan.

All half-bred ewe lambs are wintered with the replacements kept for the flock while the rest are sold for breeding replacements and any culls consigned directly to the works.

Last season the ewes weaned 132% to the ram, which Ryan acknowledges is pretty good for the type of country they’re on and feed quality means they’re not in a position to ask much more of the ewes.

The flock is fine wooled, so a significant part of the farm income is derived from the annual wool clip.

“Wool is an important part of our income.”

“We’ve averaged $10/kg in the past but this year it’s dropped to $7/kg greasy because of Covid-19. We do have about 150-160 bales that are contracted to a market in the US for socks and apparel and that helps with price certainty.”

“But wool is definitely an underrated product,” says Ryan.

“It’s tough if you’re growing cross bred wool. It’s pretty disheartening for a lot of farmers. They don’t even cover the cost of shearing.”

Farming In A Sensitive Lakes Catchment

Environmental work is ongoing for the Mt Possession Angus team.

There’s been significant parts of the property retired from use including about 10,000ha in 2008, now in DOC care as part of the Hakatere Conservation Park.

“The property was originally 64,000ha (at its peak) so a large amount has been retired,” says Ryan.

Creeks and streams have been fenced off where they can, but in some cases terrain and scale of the property means it’s a work in progress.

“We farm in what’s called a sensitive lakes catchment so we have been farming by consent, within Government regulation for a number of years now, with our high-country landscape,” he says.

The on-farm water reticulation has been developed and upgraded to meet obligations under the water ways legislation.

“We installed a large-scale solar water system last year and have been carrying out internal subdivision to try and improve pasture management and quality as well as fencing off water ways.”

“Subdivision will help us make better use of the pasture.”

On the sheep and beef platform they direct drill between 400-500ha annually with a winter feed crop and new grass.

“We’ve got extensive flats, about 4000ha at a guess, and the rest is medium to steep hill country,” says Ryan.

Looking ahead Ryan says the focus is on improvement and continuing the farm development programme.

“We want to do everything a bit better from a genetics and stud view point. The calves on the ground now are another step forward.”

To find our more visit Mt Possession on Facebook