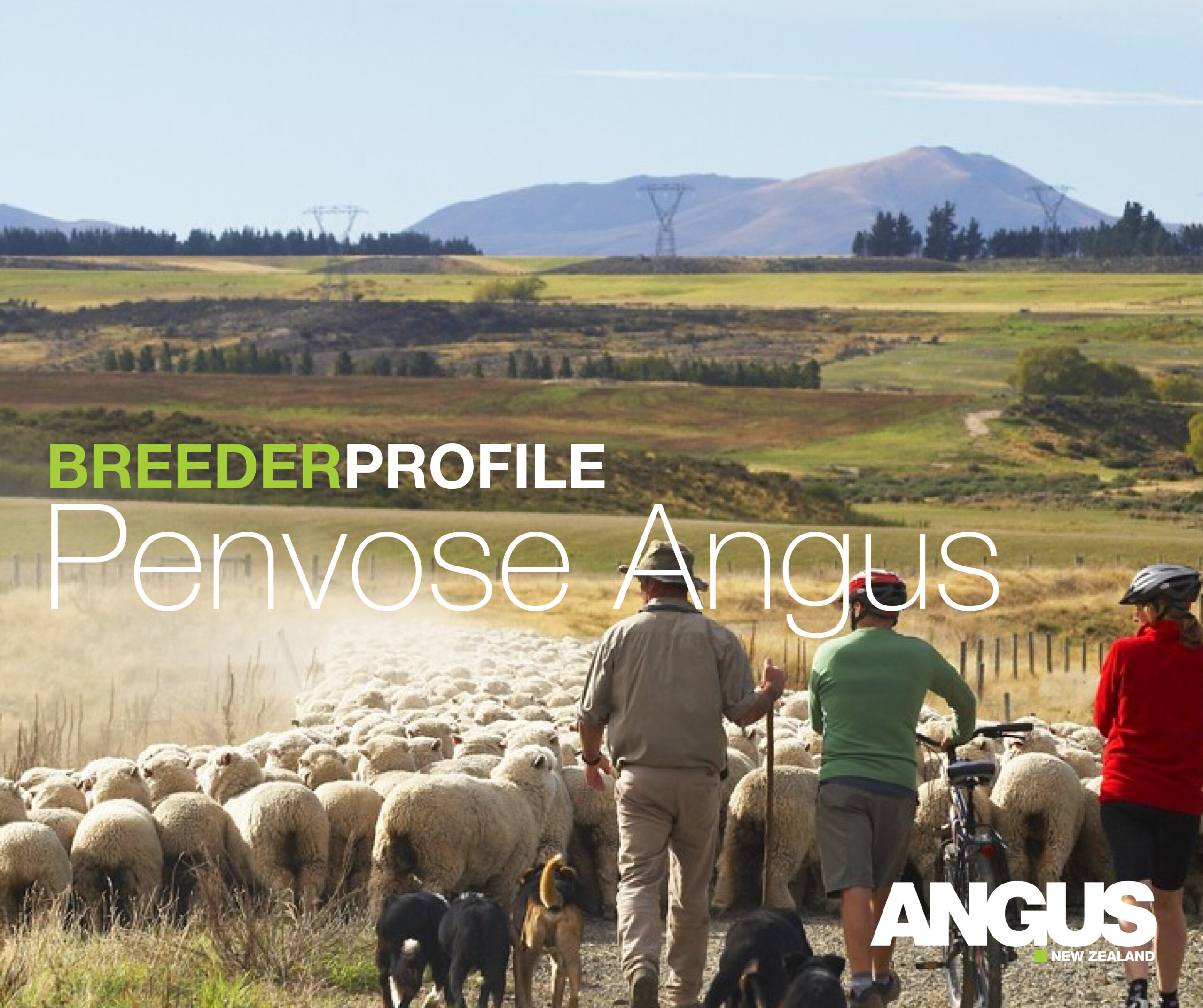 History of Performance at Penvose

The Duncans of Penvose Farms know their piece of the Maniototo intimately – it’s what you get after four generations of farming.

The family have been producing Angus on the country’s highest Angus stud above sea level since 1965. Each May, fully recorded bulls are offered for sale on the Wedderburn family farm, which has been in Duncan hands since 1894.

Graeme and Alison Duncan have the pleasure of working with son Stuart and his wife, Lorraine. At a bit over 2000ha, Penvose runs cattle, sheep and deer, with the bulls getting the pick of pasture (especially the young stock) and the cows doing a clean-up job behind the sheep. Once the calves are weaned the cows go on to the hills, where they stay until calving.

The property is made up of six original farms at Wedderburn, running 6,500 breeding ewes, 160 stud Angus, 300 commercial cows on a share-farm basis, 300 fattening cattle (steers and heifers), plus replacements. They also run 700 Red deer.

About 500ha is hill, of which 100ha grows supplementary winter feed – swede and the like – as you’d expect in the Maniototo,  winters are hard and summers scorching. There’s also another 50ha of lamb feed, comprising rape, short-rotation grasses and young grasses in permanent pasture. The Duncans also make about 2500 big bales of lucerne and meadow hay every year, all done internally.

The family installed their pivot irrigator in 2004 and now have four of them, covering about 160ha. Graeme says it’s a marked change since the days of border-dyking and wild flooding – “tipping water out of the race and hoping for the best”.

Looking ahead to the 37th annual Angus sale on their Wedderburn property, Graeme and the family say they’re “really happy with how the boys are tracking,” showing good growth and a settled temperament.

The Duncans expect to have 40 bulls for sale; the type of moderate-framed, mobile cattle that do well in their kind of country and can shift virtually anywhere.

The search for excellence continues with use of AI in the past 10 years and a methodical approach to performance. Cows that doesn’t perform to expectation are put in the commercial herd, ensuring an elite herd of stud cows.

The family owe some of their breeding performance to a decision in 1977 to buy Gamble of Tuiroa as an aged bull from the Powdrell family at Wairoa, followed a decade later by Atahua Powerplay 519 from the Dalziell family in Manawatū.

Those bloodline gave Penvose a sound breeding base which continues today.

“We’ve very conscious of the needs of the commercial farmer, including moderate birthweight and ability to get to a good 600-day weight, with good rib and rump fat and high IMF.”

Graeme says everything’s bigger at Penvose than when he started out on the place but it’s also a natural and necessary progression. He’s particularly pleased to see a new generation showing enthusiasm for the business: Stu and Lorraine’s eldest son Mitchell is getting farming experience while studying at Lincoln University while his younger brother Todd helps out at Penvose when he’s home from boarding school. Daughter Ellie is in her final year of landscape architecture at Lincoln.

This next generation have grown up in a Maniototo tapped into tourism through the Otago Central Rail Trail.

Graeme is the first to admit he didn’t think the trail would do much good for farmers and the general community when it opened in 2000.

Before then, about all that was left of Wedderburn after the closure of the school, the post office, and the garage was the pub – and that was struggling.

“I didn’t think the Rail Trail would work; nothing else had worked in rural New Zealand in the ‘80s and ‘90s. It looked like ‘last one out, turn out the lights’, Graeme says.

Instead, the Duncans are part of the regional revival. The family run Wedderburn Cottages – 14 cottages plus The Lodge – a converted 1928 farm homestead – and four miners’ cabins. All up, 55 people can rest and relax, and enjoy the stunning views from the Duncan’s farm.

Up to 1250 people can stay per month, offering riders comfort in the middle of the 152km trail. Penvose visitors have the relative luxury of their own bathroom, good food and wine and good service. For those interested in local history there’s also the Red Barn, a mid-trail resting point that doubles as a display of Wedderburn’s colourful history.

“ I never thought that the general public of New Zealand would use that trail but the average age of people using it now is about 56 and it’s opened up a whole new market. It’s good for employment and it’s kept local pubs – they’re really booming along. I have to admit I was wrong; I didn’t see it,” Graeme says.

Nor did he see the value of the dairy farm that Penvose Farm invested in. Stuart negotiated this deal in 2012, to create an equity partnership milking 1200 cows, along with four other shareholders.

Again, Graeme was sceptical of the idea at first– and again he’s happy to be proven wrong.

At face value, Penvose today is a universe from the plot that that the pioneering Duncans settled more than a century ago.

Graeme’s great grandfather, David Duncan, came to New Zealand in 1863 during the Otago gold rush and made his way to Naseby.

His son, David, was the second European boy born in Naseby. This David bought a property they named Penvose.

Penvose is named after a little place between Launceston and Plymouth, the home town of Graeme’s grandmother, Annie Lory, who emigrated from Cornwall in 1879.

Annie came out on the ship Dunedin, which was to take the first shipment of frozen meat back to the UK in 1883.

Reflecting on family legacy, Graeme is proud of the past and all for innovation. Last year Penvose Angus introduced bidr online selling at its annual sale and it will be available again at the 2022 event.

“You have to move ahead or you fall behind,” he says.