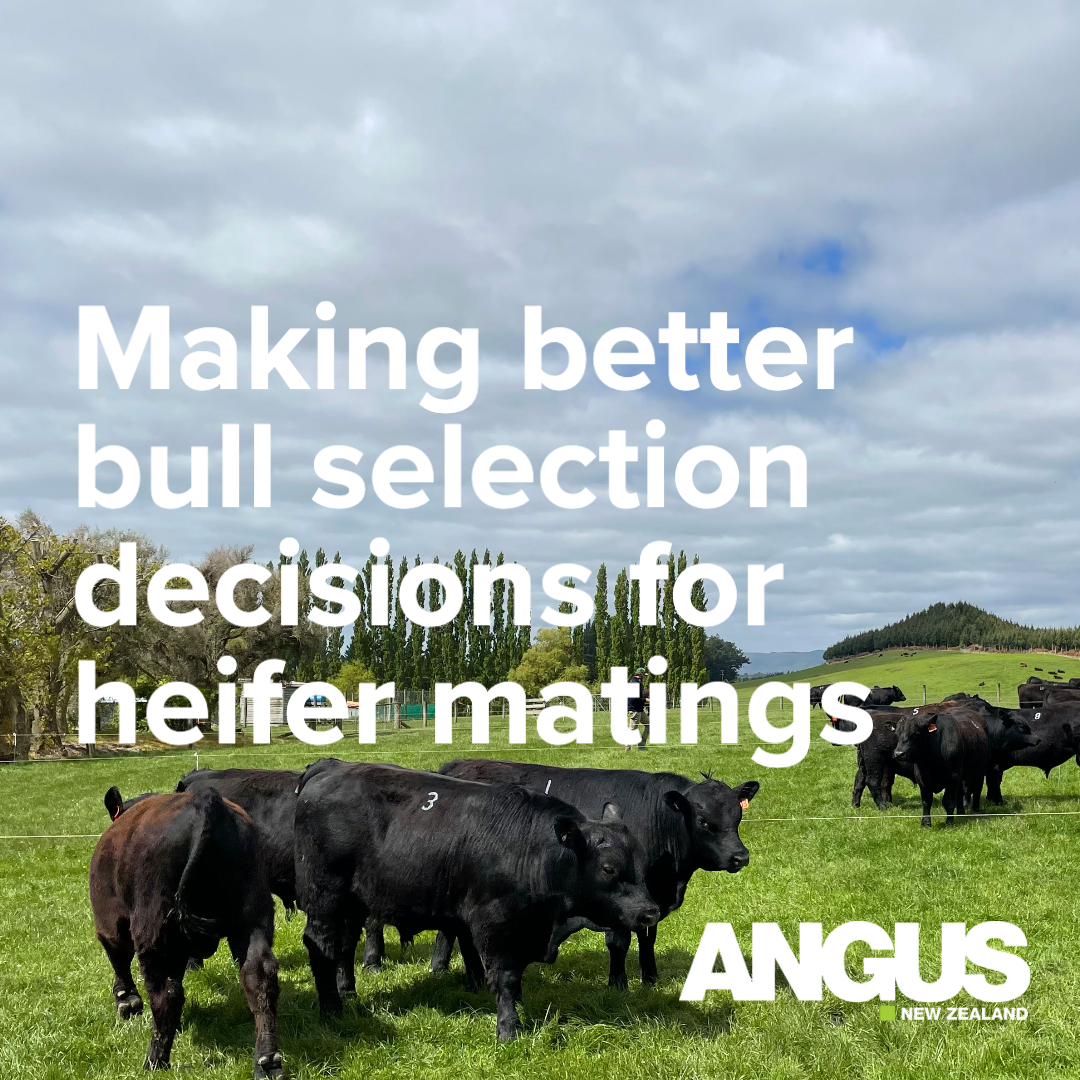 THERE are numerous factors which need to be considered when selecting a bull to mate over heifers.

In many cases, the primary aim is to produce a live calf which is born unassisted, with other economic traits (e.g. growth) of secondary importance. Traditionally this has been done by selecting a ‘heifer bull’ to mate over the heifers; that is, a bull with a low birth weight EBV which will produce small calves which are easily calved down by the heifer.

However as birth weight is highly correlated with the other growth traits (e.g. 200, 400 and 600 Day Weight), this has traditionally been done at the expense of later growth.

For those that are breeding replacement females, this has longer term implications for the genetic progress of the herd as a whole. The need for heifer bulls is of more importance for herds which are calving in spring compared to autumn, and for herds which are grazing improved pastures compared to native pastures. This is because calves born from dams which have been on good nutrition during pregnancy are heavier at birth than calves born from dams on poorer nutrition.

This article prepared by Southern Beef Technology Services discusses which Breedplan traits are of particular importance when selecting heifer bulls. In addition, it outline the relationships between these traits, and the trade-offs that need to be considered when making these selection decisions.

While this article focuses on bull selection for heifers having their first calves, where the birth and fertility traits are of particular importance, these concepts are also applicable when considering bull selection for cow matings.

The importance of considering Birth Weight EBVs when selecting bulls to mate to heifers was highlighted at a recent herd visit. At this particular stud, the producer had used a team of bulls which had Birth Weight EBVs which were about double the breed average. These bulls had some of the heaviest Birth Weight EBVs in the entire breed. This bull team had been mated to the heifers; not surprisingly 50pc of the heifers needed assistance at calving. This had a number of flow-on effects for the business. In particular, this led to:

The sire at left is a good example of this. This sire has a Birth Weight EBV which is below breed average, being in the tenth percentile of the breed for birth weight. However his EBVs for 200, 400 and 600 Day Growth are all well below breed average.

Fortunately, there are bulls out there that are “curve-benders”; that is, bulls that have below average Birth Weight EBVs but above average Growth EBVs. A good example of this is the bull at left.

All other factors being equal (e.g. structure), the second bull would be a better choice to mate over heifers.

Both bulls would be expected to produce calves which are lighter than the breed average for birth weight, thus reducing the chance of calving difficulties, which is an important trait for a heifer bull. However the second bull has better growth EBVs, and thus his calves would be expected to have better growth to target market endpoint than the calves of the first bull.

Another trait to consider when selecting a heifer bull is gestation length. Gestation Length EBVs provide an estimate of genetic differences between animals in gestation length, and are expressed in days.

The converse is also true; as gestation length increases, calving difficulties also increase. Calves which have had a shorter gestation length are generally smaller, and thus the dam is able to deliver her calf with less difficulty. Therefore, when selecting heifer bulls, consideration should be given to the Gestation Length EBVs of the candidates.

While many large studies have consistently shown birth weight to be the most important genetic factor influencing calving difficulty, there are also other aspects that need to be considered. For example, calf shape, pelvic area and calving “will” all influence calving ease.

As his daughters grow, they tend to develop into smaller cows, with smaller pelvises. Thus, when they calve as heifers, they are more likely to have calving problems than bigger, more roomy heifers.

Luckily, as is the case with birth weight and growth, curve-bender bulls also exist for calving ease traits. Curve-benders in this situation are those bulls who have above average EBVs for both Calving Ease Direct and Calving Ease Daughters.

For those with self-replacing herds, selecting heifer bulls with above average Calving Ease Direct and Calving Ease Daughters EBVs is especially important, both for reducing calving problems in the current heifers and those in the future.

For those beef producers who are producing male and female calves for a terminal market, Calving Ease Direct will be of importance while Calving Ease Daughters may not be.

The traits discussed above are not inherited individually; they are correlated with each other. Relationships also exist with other traits of economic importance. Therefore, placing selection pressure on one trait could push other traits in an unfavourable direction.

To avoid this, it is recommended that heifer bulls are selected using selection indexes. Selection indexes rank animal on profit (dollars per cow mated), within a specific production to market scenario. They have been designed to balance genetic improvement across traits, thus taking the hard work out of deciding how much emphasis to place on each individual trait.

To use selection indexes to select heifer bulls:

This approach should allow beef producers to select heifer bulls which, in addition to reducing the risk of calving problems in their heifers, should also improve other economically important traits within the herd.

When selecting heifer bulls, selection indexes should be used to rank bulls on economic merit.

Particular consideration should then be given to Birth Weight, Gestation Length, Calving Ease and Growth EBVs. Other traits which are of importance to the breeding objectives for the herd, and other information should also be considered before finalising selection decisions.

While lower birth weight is generally associated with lower growth, curve-bender bulls do exist. Where possible, try to select bulls with low to average Birth Weight EBVs and above average Growth EBVs. This should equate to smaller calves at birth, thus reducing the likelihood of calving difficulties, without compromising on growth as the calf gets older.

Bulls with higher, more positive Calving Ease Direct EBVs are more favourable, as they are more likely to have calves that are born unassisted from two year old heifers. For those in self-replacing herd situations, higher, more positive Calving Ease Daughters EBVS are also desirable in a heifer bull. These two traits need to be carefully managed to avoid decreasing the calving ease ability of future heifers.