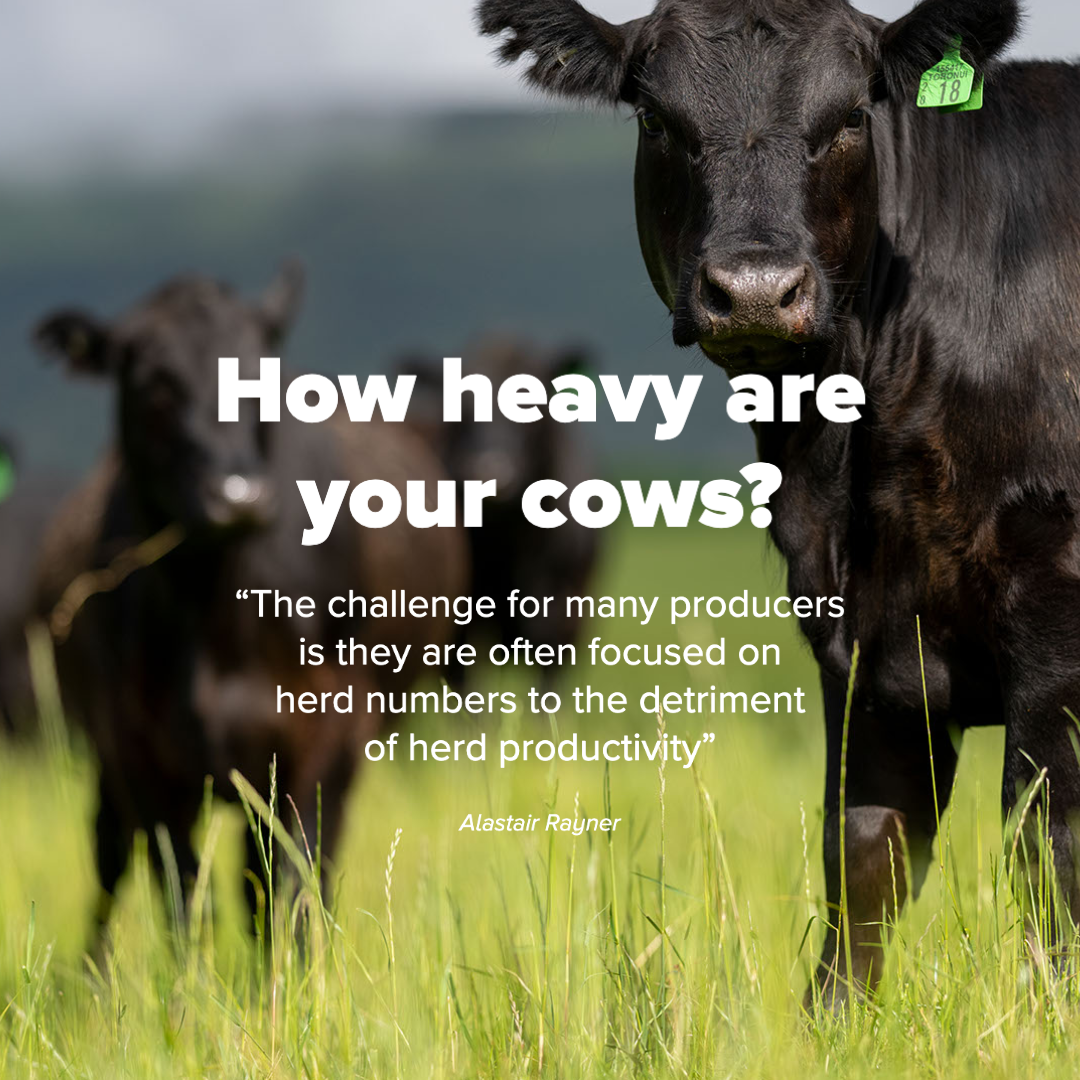 INCREASING cow size is a common source of discussion among breeders and commercial producers.  As noted last year on Beef Central, mature cow sizes have been increasing.

Angus Australia noted the genetic increases of mature cow weights is around 2kg per year, with the average Angus cow now weighing around 40kg more when compared to average weights in 2000.

From a commercial producer’s perspective, cow weights are a subject that should be considered as part of an overall breeding strategy.

Cow weight has a significant impact on overall productivity of a breeding business. However, it’s important to recognise that cow weight is influenced by a number of factors.

The size and weight of a cow has a direct impact on the feeding program of a beef business. As a general guide, as a cow increases in weight, so does her feed intake.

Dry Matter Intake (DMI) increases in line with cow weight. However, DMI will also vary due to the productive state of a cow – lactation increasing intake compared to that of a dry cow.

It is important to recognise that DMI reflects the amount of feed an animal requires each day.  In terms of how efficient cows are at metabolising energy and other nutrients, heavy cows actually have slightly lower nutrient requirements per unit of live weight.

Research presented by Assistant Prof Jason Smith of Texas A & M University in the United States showed that for every 45kg increase in liveweight, there was a 3.5pc reduction in nutrient requirements when expressed per unit of liveweight. But that slight increase in efficiency was outweighed by a 6px increase in DMI.

In practical terms – bigger heavier cows may be slightly more efficient at maintaining their weight on slightly lower quality feed, but they need to eat more to do it.

Keeping the focus on a breeding herd, the challenge for many producers is they are often focused on herd numbers to the detriment of herd productivity.

In practice, this translates to focusing on running a specific number of breeding cows. If a herd was running 200 cows in 2000-01, that continues to be the objective in 2022-23. However a total focus on numbers may mask some issues being created by the gradual increase of cow size over that period of time.

Using the example of a producer focused on 200 cows, the increase of mature cow weight over time will lead to a corresponding increase in daily (and annual) dry matter intake.

While an increase of 240kg/day may not seem significant, in practical terms this could see periods of time when feed demand exceeds pasture supply for longer periods. This could see that imbalance impacting a producers’ plans for joining, calving or for other production goals.

The flow-on effect of an imbalance of Dry Matter Intake to feed production is generally expressed through animal fatness as well as through weight gain or weight loss.

Victorian DPI data identifies that a single Fat Score is the equivalent of 70kg in cow liveweight. As producers seek to achieve a fat score or manage breeders according to fat score, the additional weight associated with increased fatness on top of higher mature weights extends imbalance between feed and Dry Matter Intake.

Producers should be conscious of the trend of higher mature cow weights both within breeds generally and specifically within their own herds.

Without regular weighing of mature cows and reviewing herd trends, it is possible that over time producers who remain focused only on total herd numbers could find the ‘creep’ of mature cow weights impacting on herd productivity.

Ongoing monitoring can also be of value in sire selection as producer can identify and look for sires that have lower Mature Cow Weight EBVs if that is a trait that needs attention within a herd.