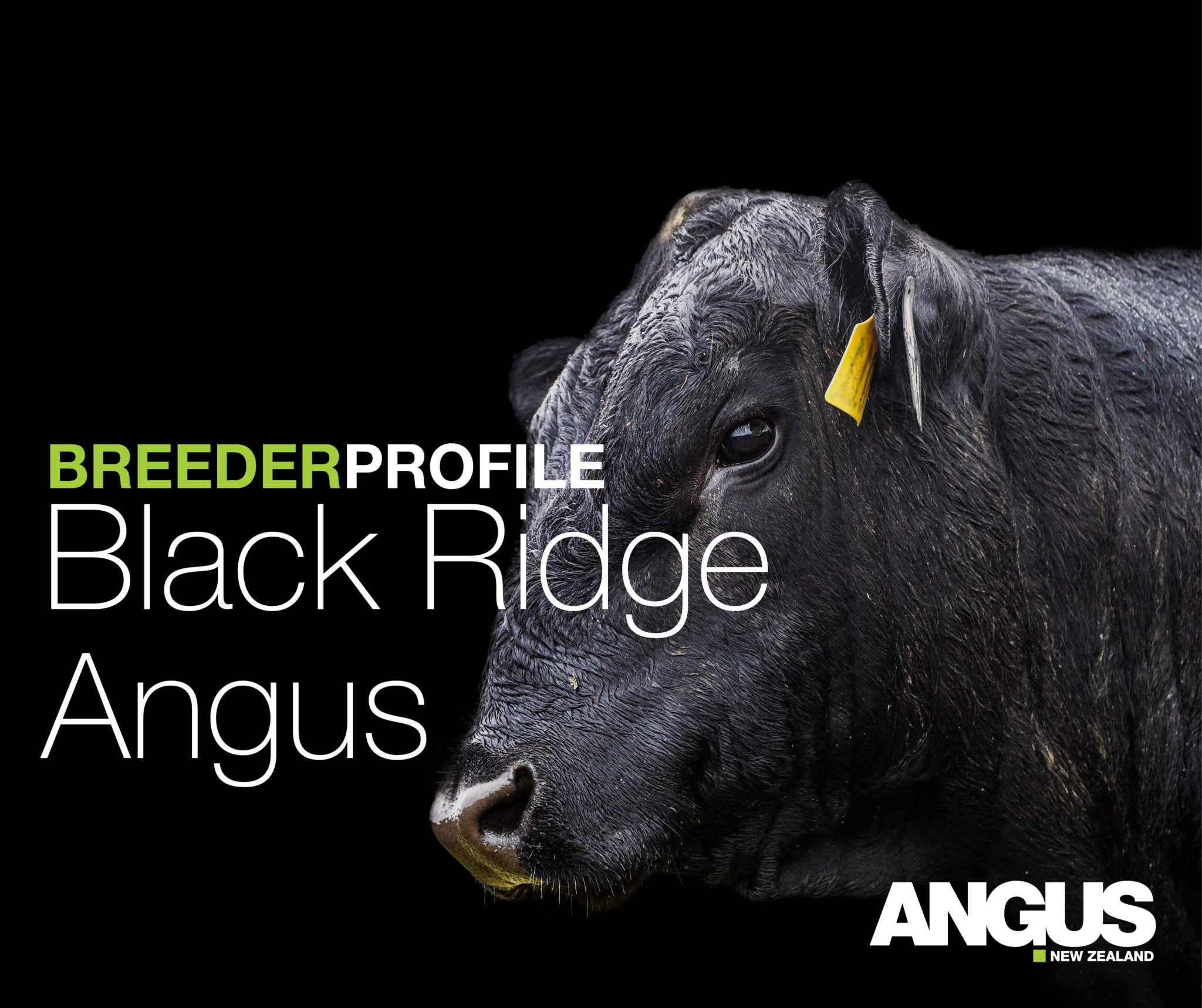 Breeding structurally sound easy doing bulls that are full of meat and power is the goal of Dean and Teresa Sherson, Black Ridge Angus Stud in Taumaraunui.

With their bull buying clients at the forefront of their breeding philosophy the Shersons are producing bulls that are easy doing and come back from working in the same condition as they joined the cows in.

The couple along with sons Nicholas, 13 and Christopher, 11 are embarking on farm expansion recently securing the lease of 341ha from Dean’s uncle next door to their existing home block of 260ha in the Taringamotu Valley, a 10-minute drive from town. Located a 20-minute drive away is another block of 250ha on Pungapunga Valley Road.

Angus weaners are bought in and then sold at 18 months old for finishing. This year the couple will trade 550 head of Angus which are sourced from around the country.

“We go where the genetics are and the price is right,” says Dean.

Dean describes the business as a fairly intensive system but he and Teresa love what they do and wouldn’t be doing anything else.

“It’s just the two of us working on the farm and we love it.”

“We are targeting the chilled Christmas market.”

This year will mark the fourth on-farm bull sale of rising two-year-old sires, being held on Thursday June 3rd at 2pm. The Sherson’s also offer about 25 yearling bulls via private treaty and are considering hosting a yearling bull sale due to growing demand.

All bull buying clients are beef farmers and Dean and Teresa say they have very loyal repeat buyers.

The family have recently invested heavily in genetics for use in their herd.

“The investment is going to speed up our genetic gain and make an impact.”

“We are here to breed a line of cattle we are confident in and proud of.”

The couple say they are expecting a reasonable impact on their herd from the sires.

“We have weaners on the ground from Maximus now and it’s evident he’s added thickness and early growth into them, which is what we hoped he’d do,” the couple say.

“It takes three years before you can sell the progeny (from a home bred sire).”

The Black Ridge Angus Stud began in 2005 with the purchase of a handful of cows from Dean’s parents Brian and Sharon Sherson of the Shian Angus Stud.

“I worked with dad for 15 years – you could say breeding Angus is in the blood,” says Dean.

“We find breeding cattle quite exciting.”

“When we look at bulls to purchase, I’m mentally picturing the type of cows we have and consider how that sire will add and compliment what we’ve already got. We also have our clients at the forefront of our minds.”

“Any bull we buy needs to take us forward towards our goal, which are ultimately never reachable – because our goals lift all the time.”

For Dean and Teresa, the ideal beast has a package of moderate EBVs backing up a structurally sound and phenotypically correct animal.

“We are conscious of EBVs and select accordingly,” says Dean.

“For us we do compromise a wee bit on figures if the animal is sound and looks right.”

When buying new genetics and selecting bulls to offer for sale, eye appraisal for structural soundness is the priority before the EBVs behind the animal are examined.

Dean says they are aiming for low birthweight and ease of calving for heifer bulls.

“We also want bulls to have EBVs for good growth. We look at the 200-day weight of +40 and breed average for the 600-day weight. For carcase traits we preferably want positive fats and a bit of IMF.”

Dean admits when it comes to marketing it’s not something that comes easily to him but says he’s lucky to be able to leave that to Teresa, an acclaimed and admired livestock photographer.

He says she handles all their marketing from online social media to advertisements in the Angus magazine and in newspapers.

Teresa is humble about her skills but says she’s had a camera in her hand from a young age, having grown up around her parent’s photography studio.

“I enjoyed taking photos of the kids and I’ve always liked photos and I have always enjoyed looking back through photos,” she says.

“It’s the challenge of capturing a great image that gives me a buzz,” she says.

Teresa is self-taught including in photography editing software Photoshop and Light Room.

However, a few years ago she graduated with a Diploma in Photography after taking an online course to get the most out of her camera and to help her find her feet using manual camera settings rather than relying on the auto features.

Her interest in imagery has also extended to the development of a budding business – Out The Gate Art.

“It’s new and I’m hoping to get it more up and running in the near future.”

“It stemmed from doing a lot of prints for people so I decided to offer prints and canvases more formally,” she says.

One day she’d like to expand to photographing other breeds and animals.

“Out The Gate means I can still be hands-on with our growing farm business and stud while still enjoying my photography,” she says.

Angus New Zealand are fans of her photography having used several images for promotional work – including covers of the Angus magazine, the breed diary, the website and annual report booklet. One of her Angus images has also recently appeared on the cover of the autumn edition of Business Rural North magazine. Teresa is also the judge of the Angus NZ Allflex Snap It and Send It photography competition.

In terms of marketing the Black Ridge Stud itself she says she does a lot on social media (Facebook) year-round and in the lead up to their on-farm bull sale she places adverts in magazines and aims to get a story published in the local newspaper.

Oil painting is another interest of Teresa’s and it fits nicely with her photographer’s eye.

“I took lessons. I attended a six-week course in Papamoa, I drove over every week.”

“I have a thing where I like to do something new each year – it’s not really a bucket list, but I like to learn new skills and have new experiences. I’ve taught myself how to ride a two-wheeler motor bike and learnt to ski – but I learnt I’m not a skier,” she says laughing.

Mating begins in October with the sorting of mating mobs done as cows and calves are shed off from their calving paddock.

Dean says they run one bull to 50 cows.

This season the couple scanned 176 cows in calf from 182 mixed age cows. They agree it’s an exceptional result for the season they’ve had. The two-year-old heifers scanned 60 from 65 in calf.

Weaning occurs late February, simultaneously to pregnancy scanning, and the calves are drenched and weighed. The calves come back to the yards mid -March for freeze branding.

Dean says there’s no target for weaning weight however their aim is to have “no bottom” in the mob.

Following weaning the cows perform pasture grooming duties. Dean says tidying up pasture covers is a balancing act of getting them groomed and not chewing covers too low prior to winter.

After weaning the heifer calves run with the lambs on the hills and the bull calves are run as one mob supplemented with baleage.

About a month before mating the yearling heifers are moved to country with slightly better pasture covers so they are on a rising plane for improved conception.

At pregnancy scanning any late calving cows are identified and run in a separate paddock. The cows are monitored weekly from late June onwards and anything springing is shed off and given baleage and causmag mixed with water and poured on the baleage.

“Then once they are really springing, they are shed off again and grazed behind a wire where they calve.”

Dean says the in-calf cows also get a magnesium bolus at calving time.

“It’s slow release and acts for 12 weeks. When cows are under pressure and being fed daily, they need additional magnesium, it’s a mineral they can’t store.”

Animal health is a commitment the Sherson’s take seriously given they are trading some cattle and buying and finishing lambs.

Their animal health programme is extensive and is considered a vital investment for the production and welfare for all stock in their business.

Calving occurs in September behind a wire in safe paddocks to prevent any calf misadventure. All calves are tagged and weighed at birth. At about five days old, the cows and calves are shed off into their bull mobs, ready for mating a few months later.

“We have a list and they are put into their mobs ready for mating in a couple of months.”

Dean says like many parts of the country pasture growth stops during winter and he says it’s vital they have a solid plan in place to ensure all stock are well fed. The home block is mainly south-easterly facing while the Pungapunga block is a balance of north and south facing country.

“We have to make sure we have our stocking numbers right and we aim to have plenty of tucker ahead of them. It’s not blowing in the breeze tucker, but there’s a good bite to it.”

Growth is variable but October is probably the month it can be seen “taking off” the couple agree.

Dean says the lambs currently being bought in (April) will be carried through winter and it’s easy to see them piling the weight on in October when pasture growth resumes.

“We take a pick from them every two weeks they grow that fast in October.”

“Dad has a McHale bale wrapper and gear which we use to make our own baleage,” says Dean.

“This year we made about 400 bales. With the new lease block, we might be able to reduce that.”

He says all the baleage is used to feed everything well through winter.

“We always have a plan (in our head) and we are thinking about it daily and it evolves all the time. Of those bales there might be some left over, but they’re our insurance policy.”

He also notes that when the growth does start cattle quickly show a preference for pasture over the baleage.

The topography between the two blocks is similar.

“I can leave the home block in a fog and head up to the Pungapunga and it’s nice and sunny and then when I get home it’s still foggy,” says Dean.

The home block, including the new leased land is described by the couple as medium to steep hill country with about 40ha of cultivatable country. The Pungapunga block is a bit easier country.

“Taking over the new lease is a god-send and it will change animal management logistics a lot. Bringing the cows into the yards for TB testing and running them up and over the 1.5km 200m climb is quite a task and the new country will make life easier on the stock removing the need for that climb as often.”

To find out more visit: