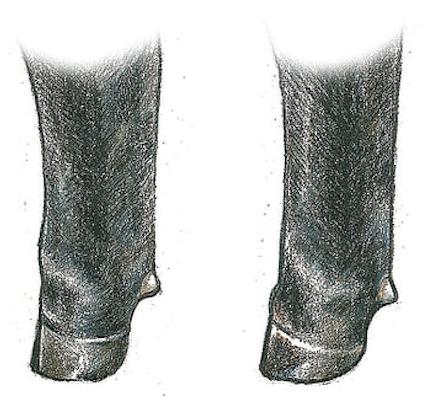 Structure is a trait that has moderate to high heritability. As a result, poor selection decisions may quickly result in an issue developing within a commercial herd.

While this poses a long-term issue for herd managers, there are also more immediate considerations. As highlighted in last week’s genetics column, issues associated with poor foot and leg structure have a direct bearing on herd conception rates, and the associated flow-on to business income.

Making time to assess the feet and leg structure of bulls (or replacement females) is therefore an exercise which can provide immediate and long-term benefits for any beef business.

Assessing feet should be a process that is consistent across all four of the animals’ limbs. A foot with the correctly-shaped claws enables the animal to evenly distribute its weight. US research identifies that under normal circumstances, cattle hooves will grow at around 500-600mm/month.

In the course of normal activity, correctly shaped feet (hooves) are naturally worn down, keeping the feet balanced and aiding in free movement.

Feet issues tend to arise when the structure and shape of the foot or the limbs above influence the way the hoof is placed on the ground. This in turn will impact on the rate of wear and potentially creates situations where feet are no longer able to offer a balanced distribution of weight.

The common issues where feet are impacted by the structure of the animal include straight shoulders (or straight hind legs). The increased angle of the shoulders causes the lower limbs to become more upright, and the foot to then have a narrower presence on the ground.

High pasterns and weight on the front of the foot are very clear indications that the animal is straight-shouldered. From this assessment, making the animal walk forward often shows issues with the ability to step out in a free-moving manner.

At the same time the significant weight of the animals’ forequarters on these straight pasterns and toes can lead to swelling and general lameness. As an indicator, the feet shape – along with the pasterns – quickly place an animal further down the list for selection.

At the other end of the scale are the issues associated with low pasterns and long claws. Looking at feet, the ideal angle is for the pasterns and foot to be at a 45-degree angle to the lower leg.

Lower pasterns often indicate issues associated with animals that have either too much shoulder angle, or in hind legs, an indication of sickle hocks. An immediate impact of this can be seen in the shape of the claws, which tend to be much longer as the result of less wear

From a selection process, this trait is a concern, as it identifies animals that potentially have issues with legs, shoulders and hips that may result in reductions in long-term mobility and longevity for breeders. For those breeders considering feeding-on steers, poor feet and leg structure is a major contributor to poor performance in finishing programs.

While the angles of pasterns and lower limbs are a major indicator of potential issues, the shape of the individual claws also should be a focus. For feet to evenly carry the weight of the animal, both claws need to be even in shape and size. Some differences in shape and size can be caused due to structural shape of the upper limbs.

The shape and structure of a bull’s lower legs will impact the shape of the feet. Often it can be hard to assess the limbs of bulls, and so feet provide a very good reference point to consider any potential issues.

In a correctly structured bull, it should be possible to imagine a line directly from the shoulder, through the knee and down between the claws on the front foot. This indicates an animal is correct and able to manage weight load across the major joints.

Unusually shaped claws often indicate some deviation away from the correct line.

Animals may have one, or both feet turned out. This often results in pressure placed excessively on knee and foot joints. This fault tends to be seen best in the shape of the inner claws being more worn or different in size to the outer claws.

Turned in feet are often associated with bulls that have broader, prominent shoulders and can see the shape of the outer claws more worn. When these animals walk, their gait appears to roll, rather than stride, and these animals can suffer arthritis more severely than other animals.

In the case of the rear feet, the shape and angle of both the claws and pastern, highlight issues associated with rear legs and potential risks of arthritis or injury with hips and knees. Both these issues impact a bull’s willingness to walk and serve cows particularly as they age.

There is also strong evidence that bulls which are straight-legged are more frequently clumsy servers. This results in high incidences of penile damage. Sickle-hocked bulls are also clumsy servers particularly at the dismount.

Both are undesirable traits and a major contributor to the breakdown of working bulls.

Aside from structural issues, nutrition also impacts on feet. Overfeeding, especially protein, can cause abnormal hoof growth. While this may not be an issue for long-term trends in a herd, the short-term impact on walking ability can see these animals less mobile and less willing to serve during joining.

Starting with the feet first, it’s possible to more consistently identify faults that should be avoided.

Canadian research suggests that while feet and legs have a heritability of 21pc, the genetic correlation with an animal’s life in a herd is much higher, at 52pc. This suggests that making the time to look at feet and legs and use the shape of the foot to guide assessment upwards to the animals’ major limbs will have long-term pay offs for a herd.