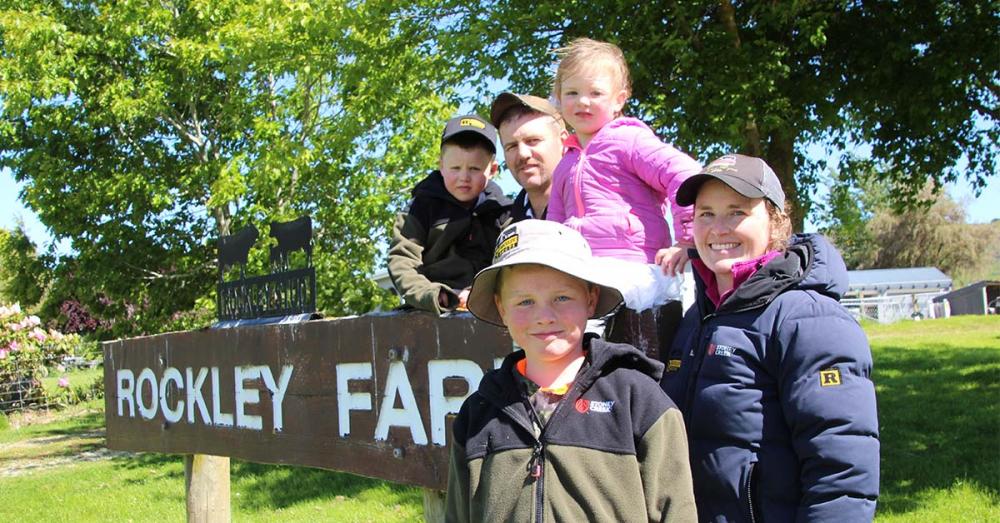 A Southland couple are carrying on the tradition of breeding Angus 157 years after it was first introduced to New Zealand. Ross Nolly reports.

The Angus is the oldest European breed of beef cattle and has been recorded in Great Britain since the 15th century.

In 1863, the breed arrived in Otago and 157-years later, Katherine and Philip McCallum are proudly bearing the standard for the breed at their Rockley Angus Stud at Balfour.

Angus cattle are the most popular beef breed in the country for a reason, and the sheer fact that the breed has been here for so many years, shows that the breed suits the purpose it was designed for.

The love for Angus cattle flows deep in Katherine’s veins. She grew up in the farming industry and together with Philip have been farming together for 12 years. Philip also hails from a dairy farming background.

“It’s a family thing. My grandparents had an Angus stud (Lora Angus Stud) and started me off with two heifers to start my stud,” Katherine says.

“My grandfather showed his cattle at the A&P Shows, and receiving an Angus NZ scholarship in 2008 to visit Australia for six-weeks to spend time with different Angus studs ignited my passion even further.”

They also winter 500 dairy cows from the Mandeville dairy farm they have recently taken over from Philip’s parents.

Due to M. bovis they have tried to keep everything “in-house” in recent years.

“We run our R1 Angus heifers with the dairy heifers just for mob size. You have a lot of mobs when you run sheep, beef and dairy stock,” Katherine says.

Over the last three years, the couple have held a yearling bull sale, predominately to beef farmers, for heifer breeding.

“We have a strong focus towards calving ease. Angus cattle are generally easy care, yield well and finish quickly. They’re not the biggest carcass but you must look at their efficiencies and their eating quality too. We don’t want to be wintering animals twice.” she explains.

“We usually lease our yearling bull bottoms out to the Mandeville dairy farm to use over the cows after AI; the bulls are then rested and used to tidy up some paddocks for a few weeks and sent straight from the dairy farm to the works. They’re very efficient and end up weighing well. Last season they averaged 308kg carcase weight.”

There is a very large gene pool for Angus cattle in NZ which allows farmers to work within the breed for their own specific target market.

Some will breed more along a terminal line to achieve bigger animals with bigger carcasses and higher growth. They are aiming for moderate framed, more efficient, easier calving animals.

Katherine ensures the Herdsire bull’s calving ease figures are present before ever putting them over stud heifers and cows. The aim is to have the birthweight at 35kgs and at present, the newborn calves range in weight from 30-42kg. But that is retrospective of the environment and feeding.

At present all of Rockley’s clients are beef farmers. But she sees future opportunities to put their bulls over dairy heifers to obtain earlier calves and to reduce the amount of bobby calves.

“The Angus NZ EBV breed average is +4.3 for birth weight. When we’re looking for bulls to breed over our stud herd it must be below that,” she says.

All of their bulls are sold as yearlings. They can be grown well over winter and be ready for the farm’s October bull sale. She aims to have her yearlings at 450kgs at sale, but they can range from 420-540-kgs.

She also aims to have their bulls away to clients within two-weeks because their dairy heifer grazing AI starts around two weeks later on Rockley.

Katherine says they only keep good temperament cows and bulls.

“When we’re weighing and tagging calves at birth, any cow that tries to get in the trailer with Philip as he weighs the calf will be culled,” she says.

“We do structural assessments of our heifers, and if they have a temperament score of a three or above (a two is marginal), they’re culled.

“Bulls with a good temperament help ensure the safety of everybody on the farm.

“Our contract milker has told us that our bulls last season were very quiet and good to work with.”

They have found the Angus bulls have good libido and are able to get a lot of the girls in-calf. They work their way around the cows and aren’t lazy.

The resulting calves are a good moderate size when born, and the cows tend not to have any calving issues.

“There’s a great deal of diversity within the breed which provides a great selection for beef and dairy farmers,” she says.

“There are Angus studs from the top to the bottom of the country and NZ breeders have had many years to weed out many poor traits.

“Each stud breeder has their point of difference so it’s simply a case of understanding their programme to see if the animals they produce fit your requirements.

“The stud breeder you pick should be two steps ahead in the direction of your own breeding objectives for your cow herd.”