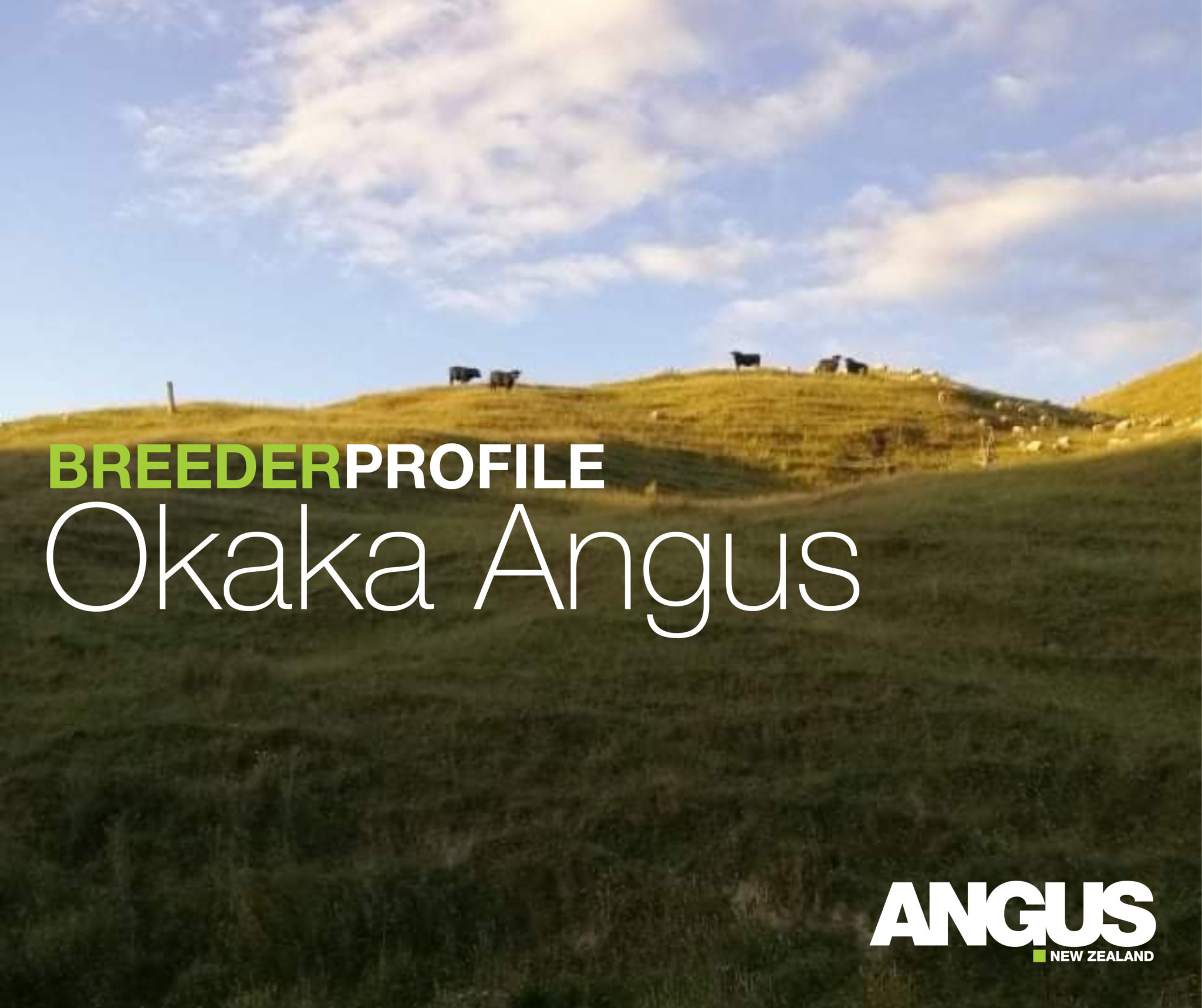 CLIENTS A FIRM FOCUS FOR THE REVELL FAMILY OF OKAKA ANGUS

Meeting the needs of hill country farmers with a consistent product is the goal of the Revell family who established the Okaka Angus Stud near Taihape five years ago.

Paul and wife Susannah have been working hard to develop a herd that meets the wants of their steep hill country clients.

His target is a consistent line of genetics producing consistent calves.

“I like to look at a mob and see they are a real line of good cattle – not just one good animal,” says Paul.

“They need to be good meaty animals with structure to cope with the conditions.”

To reach this goal Paul says he is firm when it comes to his bull selection for use in his stud herd.

“We want to create consistency and we have an animal we believe to be the best in most places. We have parameters for EBVs and figures are a tool in my selection tool box.”

“I am very aware of what’s standing in the paddock and am wary of outliers. I like to see not just one or two standouts from the bloodline, but I like to see a handful of bulls that I’d be happy to use over my commercial cows.”

Paul says it’s important to him any herd sires are NZ genetics.

“I like to see them proven and working in NZ.”

The Okaka Angus Stud comprises 80 registered cows and these run with about 75 commercial cows which are predominately Angus with the odd Hereford Angus cross. There’s also a mob of about 2500 Romney ewes (including two-tooths). The Revells have also been grazing about 500 hoggets in the past few years.

The base of the Okaka Stud has been formed with the purchase of females from the Waitawheta Stud of Alistair and Pat Sharpe, the Meadowslea Stud of David Giddings and Red Oak Stud of Richard Orr. The Revells also incorporated the Falkirk Index with Ian Walsh to develop an animal they believe will work for them and their clients.

The Falkirk Index is used to estimate the retail meat value of live animals. The system uses ultrasound scanning technology to scan the livestock carcasses, gather data and produce an accurate index value through developed formulation.

Paul says there is a lot of data and information that farmers can use to make decisions.

“There’s a balance to all that data and an animal in the paddock – for us it’s what produces consistently through the mob – we want a uniform type of animal, which means less waste.”

“It’s a nice balance and many of the flats are on the hill tops.”

The farm has historically been summer safe with average rainfall of about 1100mm but Paul has noticed the weather patterns becoming more variable and dryer.

Paul is fourth generation on the family farm with the property being farmed by the Revell family for more than 100 years and the family being founders in the district. The family’s plan is to apply for Century Farms recognition.

Paul who studied Ag Science at Massey University returned home in 2003 having done his OE and spent time working on other farms after graduating.

The family are active in their local community with Paul leading the organization of the local horse sports and wife Susannah is teaching principal at Papanui Junction School where youngest daughter Sally, attends. Son William is in his final year at Huntley School and Thomas is in year 10 at Palmerston North Boys High.

A Typical Year at Okaka:

The commercial cows calve from October amongst the ewes while the stud cows calve in August on conserved pasture behind a wire for ease of management when it comes to tagging and weighing. When the calves are about a month old, they are shed off and run on the gentler hill country.

Paul says the August calving date for the stud cows is early for the district but it needs to be so his cattle aren’t behind other studs in the region.

“It’s good to get them on the ground and having the staggered calving works too.”

Target weaning weights are 250-300kg LW and he says it’s a weight that’s an important part in providing clients what they want.

“Early growth is important,” he says.

During winter the stud cows are put to work cleaning up the hill country pasture, following the ewes before coming down for calving.

As many cows as possible are run on the hills during spring until joining the bull.

Even though it’s early days in the development of the stud the family have been starting to get the word out about their Okaka Angus genetics by sponsoring local events and clubs and advertising in the Angus magazine.

Winter 2021 sees a milestone reached with the family hosting their first on-farm bull sale in June.

Paul and Susannah will be offering 10-15 rising two-year-old bulls, most likely via a helmsman auction.

He says they are in the final stages of confirming the date.

Paul says they are incorporating Stockbook into their farm business and doing all they can regarding DNA.

He says there is a lot of information for stud breeders to make decisions on and his preference is to use EBVs and DNA data in conjunction with eye appraisal targeting a well-balanced animal.

The couple have recently joined a regenerative farming group and Paul feels there is a role this can play on the easier hill country. More can be done with grazing management to encourage improved pasture performance.

“I have also dabbled in different fertilizers and there has been no P on the farm for 10 years. We undertake soil testing and are topping up lime and trace elements on the flats.”

“We are looking to see what we can do management wise. That doesn’t necessarily mean put more in, but can we do more in terms of pasture management so pastures are more resilient to drought and keep it cranking and improve performance without so many chemicals.”

To keep up to date with Okaka Angus follow them on Facebook or to find out more about the bulls they have to offer, phone 06) 388 7519.