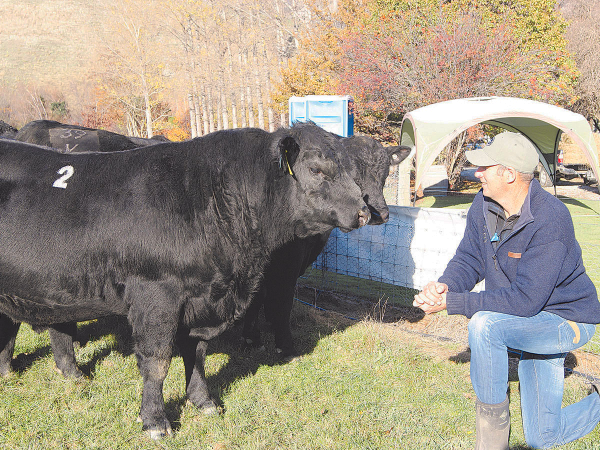 Angus breeder Mike Smith, from Cone Peak Station on the north face of Remarkable Mountains in Queenstown, describes his recent Kincardine Angus on-farm sale as an “awesome occasion” after selling a bull for $81,000.

Smith told Rural News the May 25 sale was a great reward for all the hard work that had gone into the stud over the years. He was especially delighted for his parents, Alistair and Di Smith, who established Kincardine in 1969.

“Breeding cattle does not happen overnight. It shows how strong cow lines and the ability to introduce new blood into those old, proven genetics is a great way to move forward.”

The sale was a day of celebration for the Smith family – not only marking the accumulation of more than 50 years of breeding for the Kincardine Stud but also the first on-farm bull sale for Mike and Gemma Smith.

Smith says the top selling bull – lot 2 – was a “real magic animal” and he had high hopes for a good price.

“I was hopeful he would go to a stud and perform somewhere else.”

On the day, the Smiths sold 14 bulls for an average of $14,585. The top priced bull was bought by the Giddings family’s Meadowslea Genetics, from Fairlie, who bought it via an online bid. This is the top price of the bull sale season, so far, and the second highest in South Island history.

The sale was a combination of both an on-farm and online auction. Smith says around 70 people joined them at the property for the sale, with another 50 attending online via the Bidr system.

Smith believes the sale was a great start for both the bull selling season and the Angus breed.

“It was awesome to have farmers and agents from all over the country visiting to view the bulls and have robust discussions on Angus cattle challenges and achievements,” Smith told Rural News. “The breed is in an exciting phase, there are some great initiatives are being explored with key partners and a real focus on the future ahead with the challenge of reaching new heights for all things Angus.”

Smith conceded there were a few beers had after the sale. “It was a joyous occasion. It’s great to have a bunch of rural people on the farm to share some stories and it is wonderful for rural communities to have that kind of day out.”