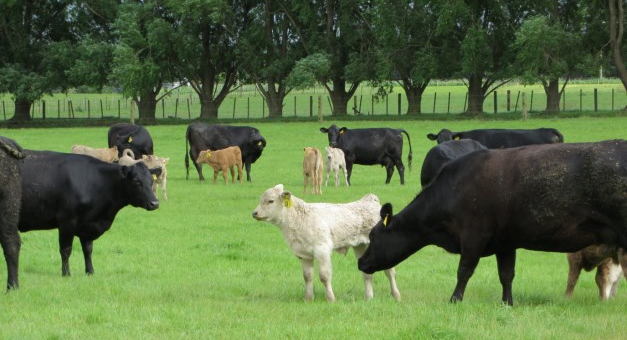 The long-term study – which is led by Massey University’s Professor Steve Morris and Dr Rebecca Hickson – looks at a range of factors that impact on cow efficiency. For instance, measuring the kilograms of calves weaned each season per kilogram of cow liveweight or per kilogram of feed intake by the cow. It also considers the number of calves reared during a cow’s lifetime, milking ability and onset of puberty, and cow wastage.

Four groups of cows are being compared – representing large and small beef cows and high and low milk production. In total, 200 cows are involved, made up of Angus, Angus-Friesian, Angus-Jersey and Angus-crossbred dairy cows.

Dr Hickson says pregnancy rates for five matings have been similar – and good – for all cow types, at 90-95 per cent. “Calves weaned per cow joined also does not differ among cow types and averages 79-86 per cent for first four calvings (calves from the fifth calving have not yet been weaned). The key is that all the cows are producing similar number of calves, so differences in efficiency come through differences in weaning weight.”

The mean weaning weight from the first four calvings is:

“In terms of efficiency, the Angus-dairy cows are very similar, because the extra cow size is reflected in the extra calf size. These cows all wean calves that are about 50 per cent of their own live weight at weaning. The Angus comes in last at 42 per cent, because she’s the heaviest cow type, but weans the lightest calf. The heavy weight of the Angus is partly due to frame size and partly because she carries about one body condition score more than the dairy-cross cows throughout the year.”

Dr Hickson says this lower efficiency is partially compensated for post-weaning, when the progeny of the Angus cows grow a bit faster than calves from the part-Jersey cows.

In March, Dr Hickson and Dr Nicola Schreurs analysed carcase data from the second crop of male calves, by Simmental and Angus bulls. A total of 63 steers were processed at 24-25 months of age.

“The results largely confirm what we saw in the first cohort – that there were no differences in meat quality, including fat colour, among the different cow types. All of the steers yielded good quality meat.”

A comparison of growth rates was compromised by last year’s drought, which potentially minimised any differences that might otherwise have been seen. The average carcase weight of steers out of:

Dr Hickson says that, while the differences were not statistically significant, they might be practically relevant for farmers at $5/kg carcase weight and across a whole line of animals.

“The key message is that, while there were some differences in carcase parameters, the final meat product was very similar across all cow types.”

The herd started with 200 cows, six years ago, and now there are 80 cows remaining. “One-hundred-and-twenty animals have left the project,” Dr Hickson explains. “For all those animals, we know what happened, when and why. We will keep the remaining cows through for another three years and look at their stayability.”

She says the wastage seems extraordinary, but based on the national average calving percentage, the project’s statistics may be fairly representative of what happens on commercial farms.

The maths: If a herd’s calving percentage is 84 per cent and dry cows are culled, it will take six years to drop from 200 cows to 82 cows – so Massey’s experience is fair.

“One of the areas of concern is the loss of cows scanned in calf but who do not wean a calf. You’ve wintered and carried them into lactation – sometimes fed a calf too – but if there is no calf at weaning time, those cows have been expensive animals.

“As an industry, are we happy with this? If not, let’s do something about it.”

Dr Hickson says there are two things commercial farmers can do are: