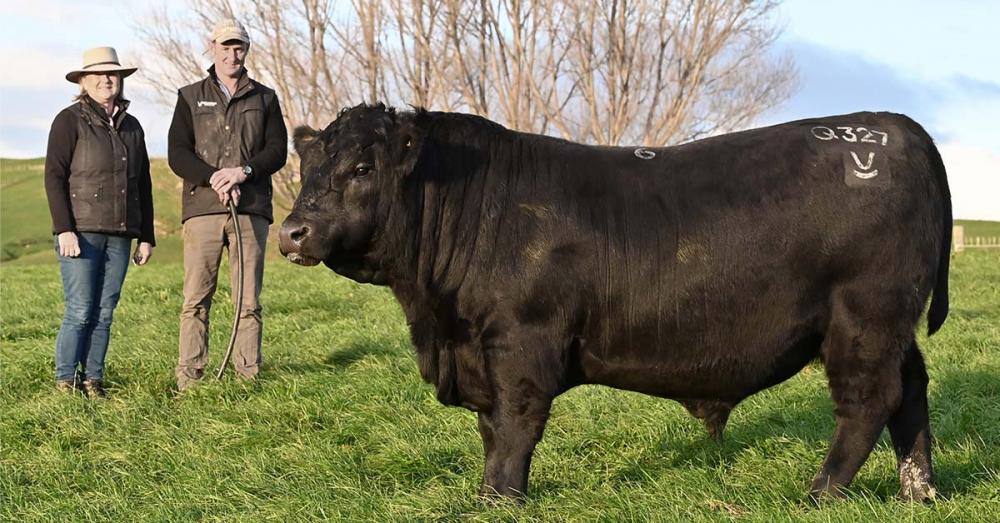 East Coast Angus stud Kaharau set what is believed to be a new on-farm auction record price for a bull when Kaharau Q327 sold for $106,000.

He was bought by fellow Angus breeders, Elgin Angus of Central Hawke’s Bay and Tapiri Angus of Wairarapa.

Q327 was described in the catalogue as a well put together bull, with a beautiful temperament, standing on good feet, with presence and style.

“Thick as a brick and deep, with a great backend, a good bodied carcase, head, jaw and bone – hard to fault,” they said.

The two-year-old bull was sired by Kaharau Atlantic 454 out of a Matauri Reality cow.

The Williams family at Kaharau offered 63 bulls and sold all, with an average of $15,600.

The sale tally was just under $1 million, also believed to be a record for a New Zealand farm bull sale.

Penny’s father and Kaharau founder, the late Colin Williams, made headlines in 1992 when he paid $155,000 for Atahua Legacy at the national bull sales in Palmerston North.

Another daughter, Susie, and her husband Charles Dowding held a final bull sale for Rangatira this year at Muriwai, near Gisborne.

A similar gross was made at one of the other big East Coast Angus sales, when Turihaua offered 67 and sold 63 for an average of $9285.

In the same district, the Giddings family at Meadowslea Angus in Fairlie offered 75 bulls and sold 70, with an average of $9300 and a highest price of $32,000 paid by Glen R Angus.

And Tawa Hills Angus at Motu offered four and sold three, with an average $7166.